Does the early bird really get the worm?

Home /Opinion/Does the early bird really get the worm? 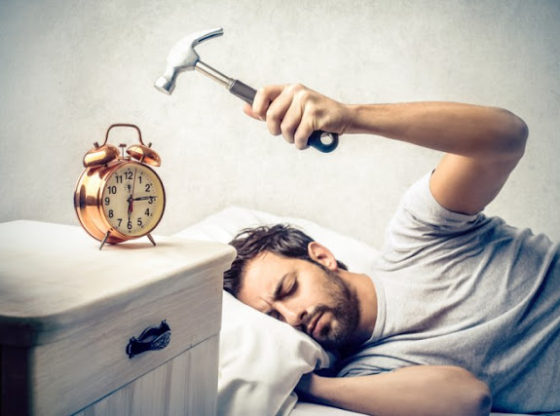 It’s eight in the morning, too early to function, too early to converse. I swear I can still hear the persistent buzzing of my alarm clock while I hastily apply my makeup, tie my shoes and my hair – all the while I am on the train. My fellow strap hangers are fortunate that I am not applying deodorant and brushing my teeth. I am envious of those sitting beside me who seem calm, collected and ready to seize the day.

They are morning birds; I am without a doubt their opposite. There are two types of people in this world: the morning person and then there is the odd one out, the night person. I fall into the latter category.

Whether you are a night person or a morning person it will dictate what hours you operate best during. Morning people are more likely to work the mundane and practical nine to five work schedule. Many night people will take on this endeavor. However, they might find this to be a difficult task, not only because of the morning commute, but also because of their inability to perform at their peak during their scheduled hours.

As I mentioned before, the morning commute is no easy task for us night people – directly effecting job choices. Sometimes, night people will intertwine their inability to perform, let alone arrive on time with their job choice; they may feel working as a bartender may be more suitable than conforming into a blue or collar nine to five rhythm. It is a shame that their circadian rhythm could potentially affect what job they may or may not take.

Live Science describes circadian rhythm as “The underlying mechanism for our patterns of shut-eye is called a circadian rhythm. This 24-hour cycle of waxing and waning biological processes is found in almost all forms of life.”

For example, if someone were to have a passion and a desire to open their own bakery and they are a night person, they won’t be able to perform as a morning person would when preparing all the baked goods in the early hours of the morning. Passion and desire for a career path should always trump your sleeping patterns when it comes to career paths.

The truth of the matter is society caters to the morning person. It is the social norm to rise early and go to bed at nightfall. Hours for businesses, public transportation, and public activities are all suitable for the early bird. Hours for stores and businesses are limited, opening in the early or late morning and closing in the evening. Very few places are open throughout the night, except a select amount of drug stores and grocery stores open for the essentials. There is not too much luxury in the options available in the middle of the night: you’ll take what you can get.

Each statement that has been addressed thus far begs the question: Are morning people more productive than night people, or vice versa? Morning people have more hours throughout their day to complete more tasks as society makes it permissible. Some night owls may argue that the tranquility of the night allows them to have the creative juices flowing and get more done without as many distractions that may exist during the day.

Many artists of all kinds took advantage of their inability to conform to an early bird circadian rhythm. The quiet of the night, the faint sounds in the distance is what brings them alive. There are barely any distractions and very few influences that allow them to think outside of the box, seeing as they are already stepping outside the social norm.

In an interview conducted by CBS News, Dr. Argelinda Baroni, an assistant professor of child and adolescent psychiatry at the Child Study Center at NYU Langone Medical Center, stated “Creative people tend to be night owls.”

During the day, it is usually of a practical nature where you know what to expect, and how others interact. But during the night, you can only imagine what those faint sounds are in the distance. I, myself cannot deal with the noise during the day. I am not antisocial, but much of the noise during the day is just that. Noise. It is mindless chatter, doesn’t require thought, it is expected and superficial. Owls have an unconventional way of thinking, functioning and creating.

At night, you can truly explore your mind. Although this holds true, these unconventional hours do not accommodate other daily tasks, such as family matters.

Early birds and night owls coexist effortlessly within society, work place, etc. On the other hand, individual households are proven more troublesome for these two types of people to coexist. This is not only due to their circadian rhythm but also their inability to share the same daily schedules. As an individual grows older, they assume more responsibilities for more than just themselves. Other people begin to depend on them [night people] and they need to be both reliable and available for their schedule too. Having a family, whether a spouse and/or children, you are required to be considerate for their schedules. Not only to ensure your children arrive at school in a timely fashion, but for quality time too. .
In an article on WebMD, they dive into the word of night owls and morning birds. In it they briefly describe the marital strife the difference in schedules can make. Jeri Solomon stated in an interview with WebMD, “We ended up getting into a lot of arguments because I took his shrugs to be disinterest, when really he was just still half-asleep.” For night people, it is difficult to ensure your family of morning people the time of day, literally.

There are numerous limitations that one will face during odd hours, including, but not limited to jobs and social activities. Despite the fact that there are just as many night owls as early birds in society, there are an increasing number of night owls conforming to morning people because society simply caters to the latter.

One day I hope to become a morning person because it is convenient. I don’t want to lose the creative thought provoking silence of the night, but for the sake of success, I will wake up early. I will be the first person on the line for coffee in the early hour that I now consider ungodly. It is my own demands that give me the desire to conform to the social norm. Overall, I insist on conforming into a morning person because it beneficial for me and conventional in the society in which we live in. Living in the city that “never sleeps”, New York City, it is awfully quiet after hours.

As cliché as it may sound, it is accurate that the early bird does actually get the worm.