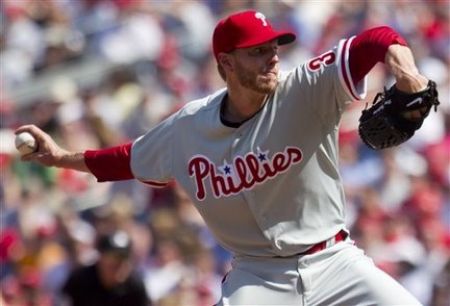 (19-6) helped the Phillies end their eight-game losing streak by allowing just four hits and one walk while striking out three.

Hunter Pence homered to deep right-center field to give the Phillies an early 2-0 lead in the first inning.

The Phillies picked up two more runs in the second and third inning off of a RBI single by Chase Utley and a RBI double by Placido Polanco to knock Pelfrey out of the game.

A new pitcher couldn’t change the Mets fortunes as they surrendered four runs in the fourth inning to take a 9-0 lead.

Carrasco went on to load the bases after hitting Ibanez. Carlos Ruiz drove in Pence and John Mayberry Jr. before Halladay struck out to end the inning.

The Mets started to rally against the Phillies relievers, scoring three runs off of Antonio Bastardo, including a two-run homer by Ronny Paulino and another off of Vance Worley before Ryan Madson pitched a scoreless ninth inning to end the game.

Philadelphia will travel to Atlanta to close out the season with a three-game series against the Braves while the Mets will stay home to host the Cincinnati Reds.