DJURIC: FROM GOALIE TO COACH

Home /Sports/DJURIC: FROM GOALIE TO COACH 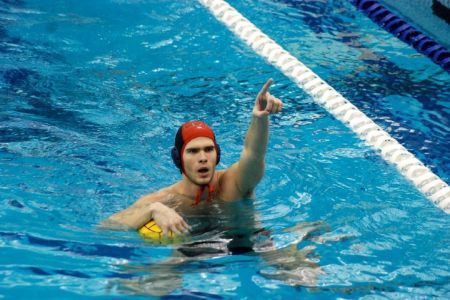 Last year Nikola Djuric was the starting goalie of the SFC Men’s Water Polo team. Today he remains with the team in a very different role.

Djuric is now the assistant to Head Coach Igor Samardzija for the 2011 water polo season.

Djuric said: “The transition from player to coach was not easy. I’m still figuring out the different ways to help the guys achieve their maximum potential in the water.”

Three months into the job he has already faced many difficult decisions.

He said: ” The discussion on who had to red shirt this season was tough. Getting the team on the same page during practice and the games is another challenging factor.”

This time last year Djuric was the starting goalie who lead his team to victory in the Eastern Championship and eventually to the NCAA Final Four in California.

Coaching is very different compared to playing on the team.

Djuric said: ” The main difference is you have to think what is best for the team. Everything you do is for the team. Nothing else matters if it is not good for the players as a whole.”

Djuric has discovered that he does not feel as stressed as a coach compared to when he was in the water. This has helped him in his decision making as well in his pre-game preparations.

” I try to prepare mentally more than physically. If anything goes wrong the coaches are the ones who make the key decisions and will take the blame. That’s why we have to stay calm and focused throughout the game no matter what happens in the pool.”

Early in his career Djuric was a field player in his native Serbia. After a few practices at goalie he was hooked and he has been that way for the past 15 years. He is still a very defensive minded coach.

As a coach he would like the team to have a repeat of last years success which will hopefully take them back to the Final Four.

THREE OF A KIND FOR BRADSHAW
PALADINO GOES PROFESSIONAL