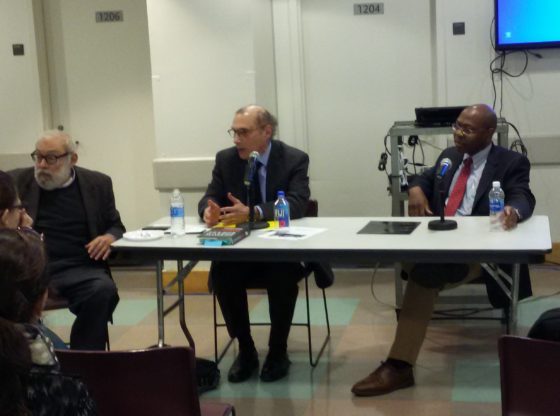 On Monday October 30th, Fred Siegel moderated a discussion with Gene Dattel and Jason Riley on the failure of anti-poverty programs in America. Fred Siegel is a conservative think tank, Senior Fellow at the Manhattan Institute, and scholar-in-residence at St. Francis College. Gene Dattel, author and cultural and financial historian, grew up in the majority-black cotton country of the Mississippi Delta. He was educated at Yale University and Vanderbilt University Law School. He then embarked on a twenty year career in finance as a managing director of Salomon Brothers and Morgan Stanley. Jason Riley is an American journalist, a senior fellow at the Manhattan Institute, a columnist for Wall Street Journal, and a commentator for Fox News.

The discussion focused on the failure of the war on poverty, which dates back to the passage of the Economic Opportunity Act in 1964. Kennedy introduced it in 1962, and Johnson got it passed two years later. To quote President John F. Kennedy, incumbent from 1961-1963, in his Special Message to Congress, he stated, “[The] emphasis of [public welfare] must be directed…toward prevention and rehabilitation”.

According to Riley, “The problem is not simply that the war on poverty has been unsuccessful by many measures. It’s that the war on poverty interfered with a significant reduction in poverty that was already occurring before the war began…The broad goal was to reduce dependency, not [merely provide handouts and material goods] to the poor”.

Riley then provided the audience with some statistics: At the time the war on poverty began in 1964, the number of people who lived below the official poverty line had been declining continuously since 1960 and was half of what it had been in 1950, and the proportion of people whose income put them below the poverty line without government benefits had fallen by about a third. Clearly, dependency on government aid was declining significantly in the U.S. when the war on poverty began. What happened next?

“Dependency increased. The downward trend reversed itself. The official poverty rate continued to decline, thanks to the increase in government handouts, but dependency on government did not decline. People were not becoming more self sufficient, and eventually the poverty rates began to rise. Between 1960 and 1977, the number of people receiving public assistance doubled. Public housing costs rose nearly five-fold and use of food stamps grew by a factor of 10”. Since 1964, the government has spent more than twenty trillion dollars on antipoverty programs alone. Still, by 1992, a larger number of people were living in poverty than in 1964. According to the U.S. census, the poverty rate was higher in 2012 than in 1966.

“And what about claims that social programs would [halt] urban unrest”, Riley continued. More often than not, we see a trend between antipoverty programs and the impact or lack thereof on urban communities. Jason Riley elaborated by stating that,

“Government dependency and racial inequality, both of which were headed in the right direction prior to the war on poverty, remain urgent problems in the 21st century. I also want to [mention] trends in black America prior to this war on poverty, which was in many ways intended to help blacks. It’s a history that doesn’t receive a lot of attention but it is nevertheless worth noting: in the first half of the 20th century, we saw racial gaps narrowing in income, educational attainment, representation in the skilled professions, etc. Blacks were not only making gains in absolute terms, they were also gaining on whites. The progress was slow in some cases, but it was steady…Yet, in the wake of the Great Society welfare expansions, that previous progress slowed down, or stalled, and in some cases even reversed course. My point is that the social pathology we see in black ghettos today is not the norm”. After referencing a quote from African American sociologist William Julius Wilson’s book The Truly Disadvantaged: The Inner City, the Underclass, and Public Policy, Riley made his closing statement:

“In other words, blacks…only a couple generations out of slavery had more stable families and lived in safer communities than their counterparts living under a twice-elected black president. One lesson from this history is that there are limits to what the government can do on this front. Another lesson is that incentives matter. Unfortunately, I don’t think our politicians and policy makers today [will learn either of those lessons] anytime soon”.

Back then, “people prepared for competition. They better understood their shortcomings. Black leadership of an earlier era was about being able to succeed notwithstanding white racism, but black leadership of today possesses an attitude of ‘don’t talk to me about black responsibilities when white racism is out there’.”

To which Riley responded, “Self development was taking place and progress was being made. Blacks were similar to immigrants; they weren’t focused on politics. Instead, they put energy into education and establishing themselves. Government programs interfered with self development, but there is NO substitute for self development”.

Despite channeling funds and throwing money into welfare programs – which were initially considered a transitory safety net – federal help that was meant to be temporary became problematic when it started to act as a lure that trapped generation after generation. According to our panelists, problems didn’t get fixed, they just got more funding. More resources does not equal better response, and we need to fundamentally reevaluate how we’re going to help people and think about why trends slowed down, stopped, and/or reversed.

The lecture, attended by prominent figures such as social activist and businessman Peter Cove of America Works, was definitely an interesting one. At the end of the discussion, there was an intense Q&A session in which audience members, including SFC students, asked questions and voiced their thoughts on the sensitive topic of antipoverty programs. Fred Siegel affirmed that “politics [are] not the key to advancement, personal self development is” and Dattel thinks “we need more frank discussions about race in America, we are moving towards a more separate society in terms of the norms and expectations, [to the point where] we have almost capitulated to living in a separate societies. College emphasis on ethnic identity tends to separate groups as opposed to encouraging a dialogue. You’re beginning to see the symbolic separate graduations, dorms, etc. This is a step backwards”.