DELFINO DOES IT ALL

Home /News/DELFINO DOES IT ALL 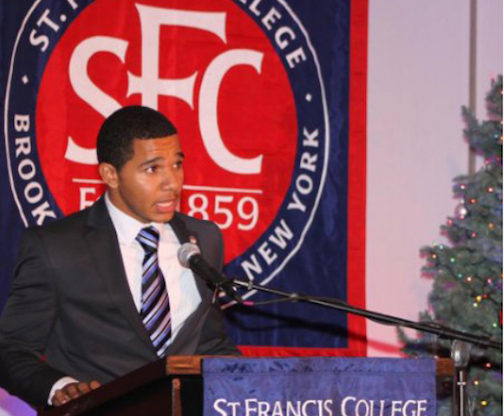 Matthew Delfino, political science major and indoor track athlete has been named valedictorian of the Class of 2014.

He said, “Being named valedictorian has been both a humbling and validating experience. I am truly honored by such an acknowledgment, and I look forward to representing my class during my remarks.”

Delfino, also known as “Matty Gunz” in the gym, is a well recognized face around SFC and for the last four years has climbed his way to the top earning the most prestigious honor of the class of 2014. Delfino is known for being a renaissance man around campus.

The valedictorian public approval rating is high and students of the class of 2014 have not shyed away when asked for a comment on Delfino.

With some saying it is no ‘surprise’ and others said it’s ‘well deserved’. Others say he is “just a great guy to be around.”

For a college with a strong community Delfino’s recognition as valedictorian is fitting, especially as someone who has stayed close with both athletic and academic circles.

Delfino is president of Model United Nations and throughout his years at SFC has been a Duns Scotus Scholar, track athlete and school gym em- ployee, UBS intern, Gartner intern and is a member of Political Science honor society Pi Sigma Alpha, and Phi Alpha Theta, history honor society.

His leadership qualities are not confined to SFC, either. Delfino has also held a position with former Mayor Bloomberg as a youth ambassador for the Mayors fund to advance youth development in New York.

Regarding plans after graduation he said, “I’m fortunate to have had multiple internships with UBS Financial Services, and Gartner Consulting, which has given me options in terms of job offers. I plan to accept one of my offers, and complete graduate school after some experience in the workplace.”

Cheretta Robson from the Career Center said, “Matthew is a hard working individual who exudes something that shows he wants more out of life… He has been taking every step to make himself successful…and he brought that to the students that he worked with here.”

Political science professor Dr. Sorrentino said, “When I first met him as a freshman he was intelligent, mature, and dedicated and had a love for political science…one could foresee him being very successful in whatever field he so chooses.”

Max Barnhart a trainer in the gym said, “He’s a hard worker and a great guy and with all the work we’ve seen him do it just makes sense and it’s not a surprise and we’re just happy for him.”

Delfino is an engaging and genuine student who gives some credit to SFC for stressing those values.

TO VOTE OR NOT TO VOTE?
PALMER FUNDS HER NEW FILM