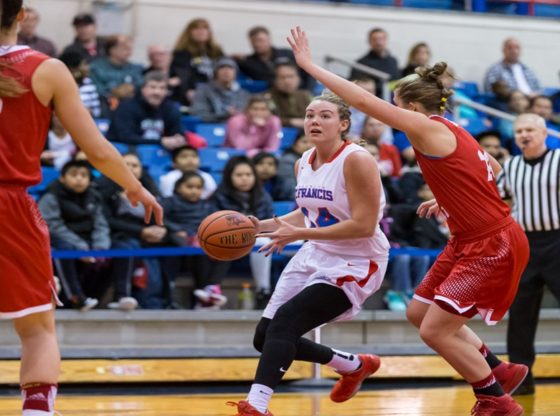 Delaney started the game with a three-pointer, but the Pioneers were quick to make it difficult for the Terriers and took the lead.

The Terriers remained strong, tying the game 6-6 with freshman forward Maria Palarino’s three-pointer and later getting back into the lead with another three-pointer by junior guard Rachel Iozzia.

The Terriers trailed 12-15 at the end of the first quarter.

Delaney also started off the second quarter with a jumper followed by a three-pointer, bringing her team back into the lead 17-15.

When Delaney sat out, junior forward Olivia Levey broke through and started scoring a lot of points for the Terriers. Trailing by as much as five points, the Pioneers lagged behind for most of the second quarter, but started catching up in the last two minutes.

The Pioneers led the Terriers 28-23 at halftime.

The Pioneers were the strong ones retuning from halftime – scoring eight points in the first three minutes as the Terriers remained scoreless. They started to score later on, but the Pioneers – leading by as much as 18 points — were so fast with scoring that they didn’t stand a chance. At the end of the quarter they trailed 37-51.

At the start of the final quarter, the Terriers were slow with scoring as their opponent was on fire and widened the scoring gap to up to 18 points again. They put forth a good effort towards the end of the quarter, but it was way too late.

Surprisingly, freshman guard Kat Phipps – who only averages 3.6 points a game – fit in a fast break layup and four successful free throws in the last three minutes of the game.

In addition to her career-high scoring, Delaney recorded one assist and two rebounds on 2-for-2 shooting from the foul line and 3-for-5 shooting from nehind the three-point mark.

This is the forward’s second time leading the Terriers in scoring. Her first came in their close loss against the Fairleigh Dickinson University Knights On January 2, when she scored a then career-high 15 points. The Australian-native usually scores less than ten points a game.

This was also an important game for Phipps who gave the Terriers eight points, five rebounds and brought them closer to winning at the end making 4-for-4 three throws.

Levey accumulated six points and four rebounds in just 13 minutes of play, also making 4-for-4 shots from the foul line.

The Terriers will return home Monday to host Fairleigh Dickinson at 7 pm.