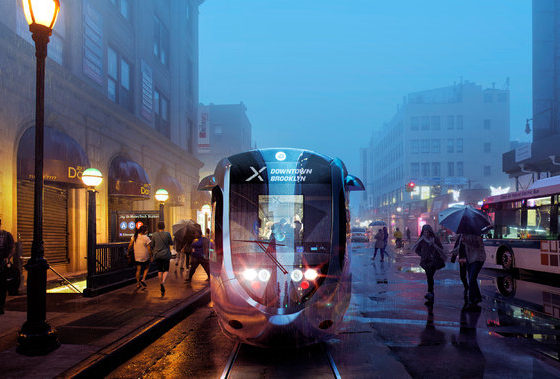 It would cover 16 miles and show off many scenic sights along the way, de Blasio said.

This new mode of transportation would roughly cost about $2.5 billion, less than what it would cost to build a brand new underground subway line, according to officials.

Work on the streetcars would begin sometime in 2019, but wouldn’t carry passengers until a few years later, officials said.

“The old transportation system was a hub-and-spoke approach, where people went into Manhattan for work and came back out,” Alicia Glen, deputy mayor for housing and development, said according to the New York Times. “This is about mapping transit to the future of New York.”

Streetcars are already a popular form of transportation in European countries as well as some cities in the United States like Atlanta, Portland and Toronto.

The streetcars would travel at approximately 12 miles an hour and a trip between Greenpoint and DUMBO would take about 27 minutes – shorter than buses and subways that travel between those two neighborhoods, according to the New York Times.

The streetcars would directly link Brooklyn and Queens without the detour through Manhattan, which is not possible on most forms of current public transit.

The stations would be located around centers like the Brooklyn Navy Yard and Long Island City, Queens, de Blasio said.

Since the system would only operate on city streets, it most likely won’t need approval from Governor Andrew Cuomo – who rejected de Blasio’s proposal to build low cost housing over train yards in Sunnyside, Queens, the New York Times reported.

“You could take the same amount of money and improve the bus system and that would go a lot further to improving commuting times,” Angotti said according to Crain’s New York Business.