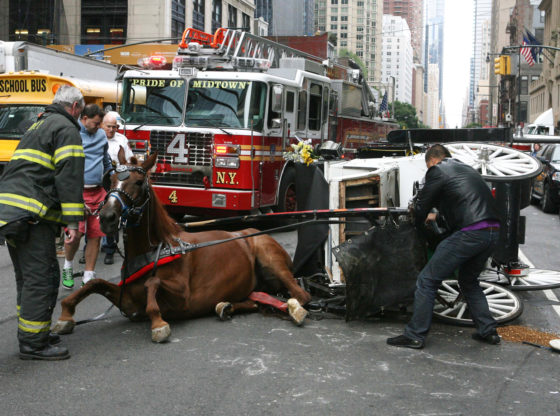 After pushing for the elimination of horse carriages since his 2013 campaign, Mayor Bill de Blasio has reached a deal that will keep the carriages in New York, but restrict their operation to only Central Park.

The deal – which was settled with the horse carriage industry Sunday — will forbid the business of horse-drawn carriages outside of Central Park beginning June 1 if approved by the City Council.

“We are pleased to have reached an agreement in concept on the future of New York’s horse carriage industry,” de Blasio, City Council Speaker Melissa Mark-Viverito, Teamster Local 553 and driver Stephen Malone said in a joint statement. “We look forward to working together on the final details of this legislation and getting passed this.”

The proposed deal would reduce the number of horses from 220 to 95 by 2018. The mayor would also agree to spend $25 million building a new stable in Central Park to house 75 horses by Oct. 1, 2018. The current home for the horses is on the West Side in Manhattan near Hell’s Kitchen.

In addition, the deal bans Pedicabs — a competitor to the carriage industry — from operating in Central Park below 85th street.

Tupper Thomas, executive director of New Yorkers for Parks, objects to the idea.

“This was not the way public parkland was intended to be used,” she said according to the New York Times. “Building something in Central Park for private business does not seem like the appropriate answer to this issue.”

Animal rights activists who supported the mayor’s campaign also criticized the deal, stating that de Blasio failed to keep his promise to ban carriages in the city. Animal rights group NYCLASS has called on New Yorkers to sign a petition on their website to continue efforts to completely ban carriages.

“I am calling on NYC to ban the cruel, inhumane and unsafe carriage horse industry,” the petition reads. “It’s time to retire the horses to sanctuary. Horses do not belong in a congested, urban setting where they constant breathe exhaust while dodging dangerous traffic.”

25 horse carriage accidents occurred between 2009 and 2014, according to NYPD documents obtained by the Animal Legal Defense Fund in 2014.

De Blasio responded to critics at a conference on Monday.

“It’s not everything that I wanted,” de Blasio said. “However, horses shouldn’t be plodding down the streets of Manhattan and the deal would keep that from happening.”