DAVID FIGHTS GOLIAH WITH A DISCOUNT 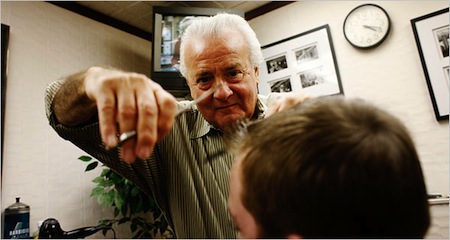 Where did all of the “Mom & Pops” go? Today, we are dependent on franchises. The Davids were family owned and staffed shops. Now, the Goliaths took over in the 1980s. What happened?

Before Goliath drove out the Mom & Pops, there were two antique stores, three bookstores and a large card and gift shop.

There were also three dress shops, two bookstores, an independent grocery store and vegetable markets and a barber shop.

Now only the barber shop remains.

The Cutting Den — originally known as the St. George Barbershop — is in the Hotel St. George Arcade of the Clark Street subway station and has been there since 1926 when Guiseppi LaMarco, an Italian immigrant, set up shop.

When Guiseppi opened his shop, the Hotel St. George was in full swing. A monumental olympic size pool was still there and the restaurant on the roof was known to be an elegant place to dine.

During the shop’s long reign, it has serviced many celebrities who either lived in the Brooklyn Heights’ neighborhood or in the St. George. For thirty-six years during the heyday of the St. George Guiseppi’s shop was the barber shop of choice.

Guiseppi’s son, Joseph, eventually joined him and while father and son worked in tandem, they often serviced members of the Brooklyn Dodgers; many of whom lived in the Bossert Hotel and whose headquarters were at the corner of Montague and Court.

Joseph’s son, Tom, joined his father in 1962. Rocco Scali joined Joseph and his son in 1958. According to Rocco, they were known as “the three stooges”. Joseph retired in the 1980s while Rocco stayed with Tom as he continued to run the business.

The two of them are still in residence along with Lana Kozintseva who joined them several years ago. All are ready to give a shave and a haircut — but not for two bits.

However, if a St. Francis College student presents their student I.D,. any of the three will be happy to give a discount. Stop by and if any one of the barbers are free, you will leave looking mighty fine.

If a student is interested in getting highlights, a dye job or even a perm, tucked away in a back corner of the shop are Gloria Cory and Candy DeSilva. These two ladies were a part of the fourth generation of LaMarco’s –Tom’s daughter, Dawn — to set up shop in Brooklyn Heights. When Dawn’s shop closed Gloria and Candy joined The Cutting Den.

Rocco and Tom reminisce about cutting the hair of Normal Mailer, Arthur Miller and Alan Arkin, among others. Up until the 1970s the St. George was visited by many famous and important people many of whom used the services of The Cutting Den.

Rocco’s favorite client, was Truman Capote a frequent visitor “who would come in here three or four times a week …sometimes for a shave or a head massage … after swimming in the St. George pool.”

Rocco’s also remembers when Mr. Capote went to Kansas curing the writing of “In Cold Blood.”

Another major episode in the life of The Cutting Den was when the movie “The Godfather” was being filmed in the area. Actors and crew members were often in the shop.

What is a fascinating fact about The Cutting Den? The bar scene where Luca Brazzi was killed was filmed in the St. George’s Club Wild Fyre just across the Arcade from the barbershop.

So join the hundreds of people –famous or not —who have been happy with the haircuts and services they got at The Cutting Den and you can do so at a discount with your student I.D.

EHS DORMS: A HOME AWAY FROM HOME?
WHAT MAKES YOU BEAUTIFUL?