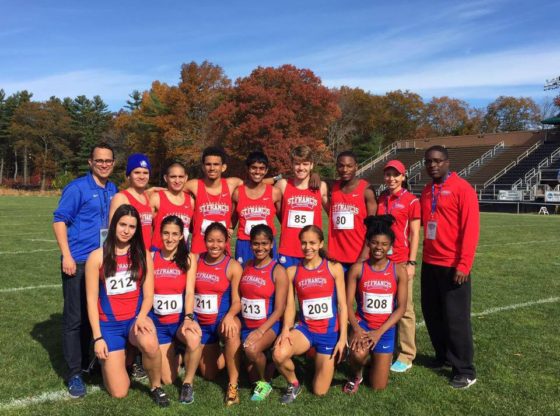 The 2015 Northeast Conference XC championships are now in the books, capping off another cross country season for the St. Francis Terriers men and women.

The Terriers men came in sixth place in the eight team field with a final score of 136 points.

The women’s squad finished tied with rival school LIU-Brooklyn, both rounding out the day with a score of 212 points each. However, LIU-Brooklyn was awarded the edge in a tiebreaker, and the Terriers ended the day in ninth place in the ten team field.

Perhaps the Terriers highlight of the day came with the performance of sophomore Annais Cummiskey who absolutely showed out in her 5k at the NEC title trot.

Cummiskey was near the top of the pack, finishing with a 5k time of 18:24.1, and this impressive number landed her in fifth place in the 80 runner field.

As a result of her big day, Cumminskey earned NEC Freshman of the Year and also landed a spot on the women’s Cross Country All-Conference team.

Junior Lena Janoda came in second for the Terriers with a time of 19:37.4, and this mark helped her crack the top-40 (38th overall).

Freshman Diondra Bryant just missed the top-50, but was third on the team with a time of 20:31.0.

Seniors Pathwahandi Silva, Sandra Raickovic, and Stephanie Morales rounded out the rest of the Terrier field with their performances this afternoon.

On the men’s side of things it was junior Luis Porto leading the way with a team best 25:55.0 8k time.

Terrier freshmen Charles Skidmore and Fredis Baires cracked the top-30 overall with their 8k results at the event.

Another Terrier freshman, Pratheip Gugendiram, was able to get inside the top-40 (38th overall) with a final time of 27:26.4.

Sophomore Aaron Nieves (27:46.0) just missed the top-40 with a 41st place finish, and rounded out the Terriers top-five. Terriers junior Wagner Elancieux came in at 68 with a final 8k time of 32:34.2 respectively.

With the cross country season now over, many of the Terrier athletes will carry over their talents to the upcoming indoor track and field season this winter.

The indoor track campaign will be off and running beginning on December 6 at the Farleigh Dickinson Patch Track Meet.

TERRIERS TAKE ON THE STRUGGLING KNIGHTS
TERRIERS DEFEAT RED FLASH IN FOUR SETS, COLONIALS UP NEXT