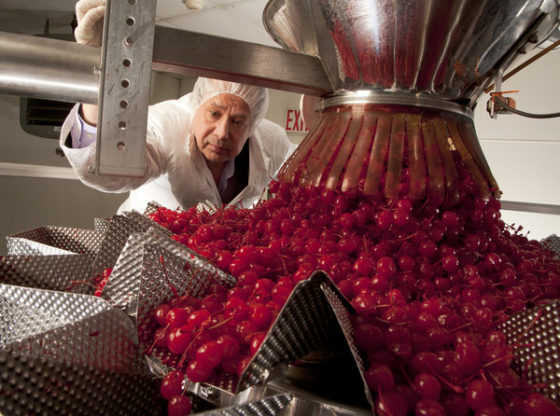 Eight days after Dell’s Maraschino Cherries owner Arthur Mondella committed suicide while authorities were raiding the alleged marijuana operation in his Brooklyn cherry plant, a court has ordered the company to pay off about $100,000 in debts to distributors before the family-owned business gets caught up with their forthcoming legal fees.

Mondella, who owned the family business located in Red Hook that sells to big chain restaurants like, Red Lobster, TGIF, and Buffalo Wild Wings, watched as investigators searched through his factory.

After five hours of questioning, the Dell’s cherries owner went to his private bathroom and fatally shot himself.

“Mondella immediately ‘asked to use the bathroom, he went in the bathroom, and, ‘Boom,’ a source said” according to the New York Post.

“Take care of my kids” were his last words that he uttered to his sister.

What authorities had found were three large bags holding about 80 pounds of cannabis and hundreds of thousands of dollars in cash.

Investigators from the Brooklyn District Attorney’s Office received a tip that the factory was just a marijuana front. After authorities kept a close eye on them for six-months, they came up with nothing.

In order to get a search warrant, the Attorney’s Office had to team up with the Department of Environmental Protection and search the place on the basis of illegal dumping of their waste syrup in the water near the warehouse.

The city put traps in the cherry plant’s sewers that ultimately confirmed the company was illegally dumping waste.

Upon looking through the factory, a detective noticed some sketchy magnetic shelving on the wall. When investigators questioned Mondella about it, he excused himself to the bathroom.

Unfortunately for Mondella, this was more than enough to get authorities a warrant for the secret entrance.

Behind the secret entrance, they found a dug out basement where they spotted the bags of marijuana.

“As soon as that door cracked, the aroma of marijuana was overwhelming,” a source said. “It looks like a cave, like they dug it out on their own.”

After the cherry tycoon shot himself, the EMS was called out to the scene.

Mondella had a gun permit for his .357 Magnum handgun, and according to the New York Post—investigators knew about it, but never asked him to hand it over.

“Poor guy, in this day and age, you can do no jail time for marijuana,” a law enforcement source said. “I don’t know why he would do that, unless there’s something worse down there.”