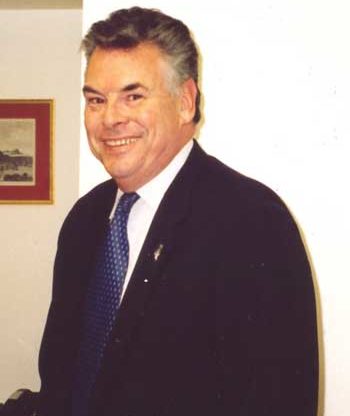 In the second series of Reflections on a Life in Public Service, Pres. Martinez-Saenz moderated a discussion with Republican Congressman and SFC alum, Peter King.

The audience welcomed Congressman King, including one student who personally thanked him for his participation in health care acts.

King has been serving as the U.S. Representative for New York’s 2nd congressional district since 2013, and is in his 14th term in Congress.

He recently announced that he is retiring and will not be running in 2020.

Pres. Martinez-Saenz began the discussion by reminding the audience of the Franciscan way: to have an open mind and an open heart, even towards people we disagree with.

He and Congressman King compared and contrasted their upbringing.

King grew up in an Italian/Irish/Jewish neighbourhood in NYC, whereas Martinez-Saenz grew up in Miami where the majority of the people were Cuban refugees.

They agreed that there was a symplicity growing up in the 20th century that no longer exists today.

King referenced the competition involved in choosing a college, as well as seeking employment post-commencement.

Still, he and President Martinez-Saenz emphasized that students have no excuses for not excelling:

In regards to post secondary education, King said that his approach – and the general approach of his generation – was to “go as far as you could and see what happens”.

King completed his undergraduate studies at St. Francis College said that he chose the college because it “was known as a very solid school [with] a solid education.”

He said that he found himself in politics unexpectedly,
“[As a student], I walked with my head down. I never expected anyone to listen to me.”

He has been in politics for 26 years, and reminded the audience of the importance of compromise,

“Every government shutdown could’ve been avoided”.

“If you come to an agreement, stick to it,” he advised. And he also discouraged listeners from backstabbing or badmouthing people, particularly opponents.

In regards to bipartisan politics, Congressman King said the following:

“We do work together, which is unique. I think it’s maybe part of that New York experience and I’m tying that to St. Francis, where people know they have to get along.”

For those who are interested in politics, the congressman suggested to “have an alternative…because life in politics can end overnight.”

This discussion was the second in the series, more will resume in 2020.