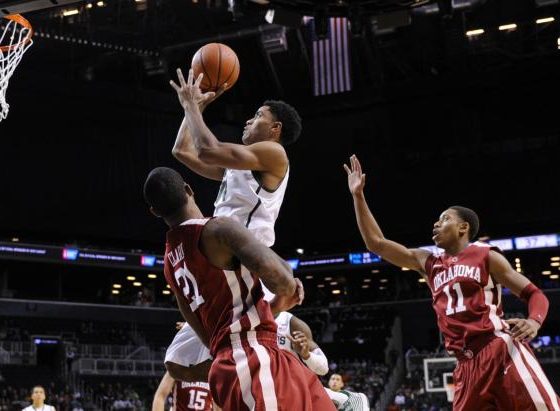 The Barclays Center of Brooklyn hosted the 2013 truTV “Coaches Versus Cancer” basketball tournament this weekend organized by the American Cancer Society and the National Association of Basketball Coaches (NABC).

Coaches Versus Cancer “empowers coaches, their teams, and communities to join the fight against cancer by participating in awareness efforts, advocacy programs, and fundraising activities.”

“It’s a great cause, it is great to come here and play in this tournament,” said Michigan State Head Coach Tom Izzo.

The tournament was won by the # 1 Michigan State Spartans,the other teams taking part in this tournament were: the Virginia Tech Hokies, the Seton Hall Pirates, and the Oklahoma Sooners.

In the first round, Oklahoma came from six back in the final minute to beat Seton Hall 86-85.

In the second game of the double header, Michigan State defeated Virginia Tech 93-76.

In the Finals, the Spartans defeated the Sooners 87-76.Michigan State was led by a career high 27 points from Keith Appling.

“”What I liked about him was that he took over under control, and he made some acrobatic plays through the lane,” Tom Izzo said about his guard.

Oklahoma jumped out to an early 8-3 advantage, but the Spartans responded to tie the game at eight.

Cameron Clark hit a three for the Sooners to give them a 20-11 lead.

Izzo liked the way his team picked up the defense after the early OU run.

“”As far as we go, we got punched in the mouth early. After the first 8-10 minutes, I thought our defense became very, very good,” Izzo said.

After a Sooner basket, Michigan State went on a 13-0 run to end the half.

The Spartans took a 45-31 lead going into the half.

Michigan State opened up a 51-33 lead, on a Branden Dawson dunk.

Later in the half, Dawson knocked down a jumper to make it 71-60. The Sooners would out-score Michigan State 8-2 to make it a five point game,73-68, but that is as close as they would get in their attempt to upset the #1 team in NCAA basketball.