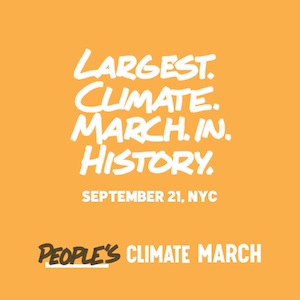 “What puts hipsters and bankers in the same boat?” This is the question posed on the flyer for the People’s Climate March. A peaceful demonstration that will greet world leaders as they gather for a United Nations climate summit in New York City on September 23.

According to their website, the march is an attempt to urge politicians to take the subject of our endangered climate seriously and get on board with efforts to mend the global warming crisis.

The organization has over 1,000 partners and is expecting historical numbers at the march in New York and worldwide. The People’s Climate March extends to countries other than the United States including Brazil, France, Spain, Ireland, Italy, and many more.

Even with an already seemingly large amount of followers, the march is still urging others to join in their efforts in New York City and around the world in any way they can. Those who are interested can volunteer, walk as a participant in the march, or donate to the cause.

The People’s Climate March is scheduled to meet on September 20th and 21st, two days before the UN meeting, in Columbus Circle and will end at 11th Avenue between 34th and 38th Streets in Manhattan.