CITY POPULATION AT ALL-TIME HIGH THANKS TO THREE BOROUGHS 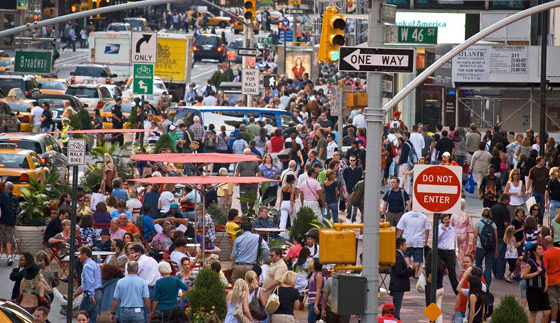 The city’s population increased by 55,000 to 8,550,405 and the three rapidly growing boroughs accounted for 84 percent of the city’s growth, the bureau reported.

Brooklyn has had the highest population growth in the past five years, followed by the Bronx, Queens, Manhattan and Staten Island, according to the Census Bureau. The population across the five boroughs has expanded by 375,000, based on the bureau’s estimates as of July 2015, the city’s biggest population increase since the 1920s.

“The sustained population growth of our city is proof that New Yorkers not only want to remain at home, but that people are moving from all over to work and raise a family in the greatest city in the world,” Mayor Bill de Blasio said in a statement.

Population growth was 7,552 for Manhattan and 1,257 for Staten Island last year.

Manhattan and Staten Island grew by 58,600 and 5,800 persons respectively.

The city gained nearly 50,000 residents due to immigration in the past five years.

90 percent of the state’s population growth since 2010 comes from New York City.

THE CHINA STUDY: WELL-HIDDEN RESEARCH DEMONSTRATING THE RELATIONSHIP BETWEEN DISEASE AND THE FOODS WE EAT
SFC TO HONOR CAMA AND COLLINS AT ANNUAL CHARTER DINNER