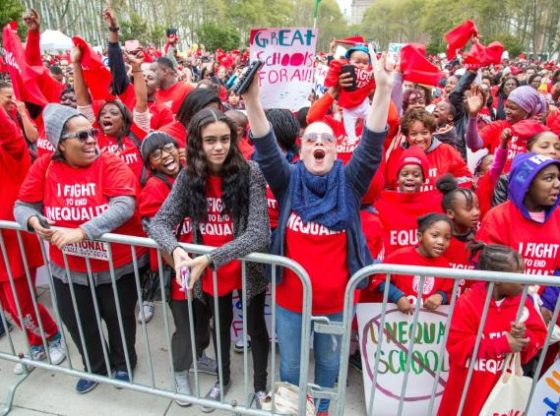 Charter schools in New York City garnered a lively show of support in Brooklyn Heights on Wednesday, October 7, when approximately 18,000 people gathered in Cadman Plaza to fight against plans to reduce funding for public schools.

The crowd of demonstrators was decked out in red shirts reading “I Fight to End Inequality” and “Don’t Steal Possible,” in protest of Mayor de Blasio’s recent announcement that his administration will defund charter schools across the city.

“Charter schools are part of the system,” Bronx Borough President Ruben Diaz Jr. announced at a speech during the rally, “and all we want, Mr. Mayor, is to treat them equitably.”

Organizers of the demonstration say that hundreds of thousand of children are trapped in a failing education system, and charter schools are one way to remedy this growing problem. They urged Mayor de Blasio to support charter schools as an alternative to the inadequate local public schools that children across the city would otherwise be forced to attend.

After meeting in Cadman Plaza, the demonstrators proceeded to march across the Brooklyn Bridge to City Hall as a show of strength and solidarity with the students, teachers, and administrators whose schools de Blasio’s prospective plan would soon defund. They also sought to take their complaints straight to the offices of the city’s lawmakers.

Before the march across the bridge, demonstrators were treated to a live performance by Grammy-winning singer and actress Jennifer Hudson, a vocal supporter of the push to better fund schools in low-income neighborhoods. The singer did not directly address the crowd, but she did mention the hashtag associated with the event—#DontStealPossible—on her social media accounts.

The support of charter-school parents will prove imperative to the 2017 mayoral race, as the political discourse surrounding education becomes increasingly frustrating for many New Yorkers.

If Mayor de Blasio plans to be re-elected, he will have to turn his attention to the issues surrounding charter schools or many more demonstrations and protests are sure to come.