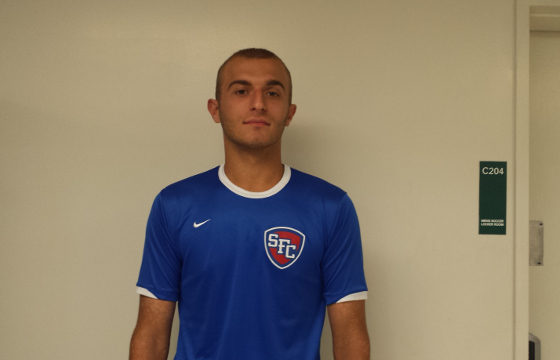 Not only is freshman Adrian Cosovic adapting to college life, but he is also making the transition from being a high school athlete to Division I college athlete. The forward/midfielder acknowledges that the game has really stepped up. He expresses that the speed of play is much quicker than that of high school, and he still has to get used to the pace of the college game.

Cosovic further explains that in college soccer, there’s always one-two touching; making ball movement essential. He also learned that college soccer requires him to be quick on his feet. His advice on playing Division I soccer is “You got to think! It’s honestly all mental”. Cosovic copes with the change by accepting that it is still a learning process since he’s only played college soccer for a month. He affirms that with more experience, better play will come.

Cosovic’s teammates play a major role in his feelings of comfort and welcome. One player that particularly is labeled as a mentor to Cosovic is sophomore defender Fabian Suele. He is grateful that although he is playing for a new team, they all have each other’s backs. Cosovic further reveals that the team has gotten on the right track despite the struggling start by stating, “We’re able to push each other through practices and games. We have to be mentally tough and push ourselves”. The team’s positive attitude has contributed to their recent wins.

Cosovic’s biggest fan is his mother because she loves to watch him play and tries to make as many games as possible. Not only is she his biggest supporter, but she is also his biggest critic. Cosovic explains that if he plays well she tells him but if he plays poorly, she also lets him know.

When asked what the most difficult thing about soccer, Cosovic voiced, “Nothing is really difficult since everything evens out. Wanting to have fun while getting used to playing on this level is hard at first, but once you get used to it, everything is good.”

Other than playing soccer, Adrian enjoys playing video games as well as going out with friends and partaking in other quintessential teenage activities. One professional soccer player that influences Cosovic’s style of play is Mario Balotelli who Cosovic describes as a “great striker”.

Cosovic plans to live up to defending the Terriers’ NEC Championship, which they won last season. He believes with this year’s team, they can still win the championship. Since Cosovic performs well under pressure, he is hungry for his first championship.

After college, Cosovic aims to go professional. If his number one goal does not work out, he wants to pursue a business career. He emphasizes that soccer is something he really wants to continue in the future.