CHANGING THE FUTURE: A GLOBAL EFFORT 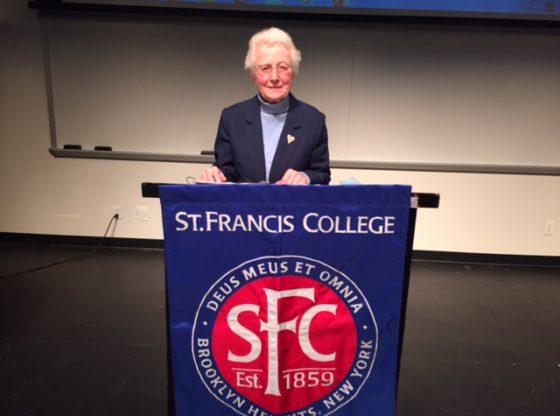 This Thursday St. Francis College welcomed JoAnn Mark, Executive Director of the Partnership for Global Justice, to speak about the United Nations, climate change, and the importance of personal civic duty.

The United Nations (or UN) celebrated its 70th anniversary last year. In 1945, after the second World War, 48 countries came together with the goal of preventing another war. They would do this by establishing peace and security, developing friendly relations among nations, achieving international cooperation, and harmonizing the actions of the states.

These four goals have come to define the UN, which now consists of 193 member countries.
In addition to delegates, there are also many non-governmental organizations (NGOs) that serve as consultants in the policy-making process.

The Partnership for Global Justice, that Mark oversees, is one such organization. Her organization has what is known as “ECOSOC” (Economic and Social Counsel) status- allowing them to gather input from their members to give to the United Nations. “We have members in every country who are on the ground trying to help the people in the country who have needs,” said Mark.

This sea of voices came together last November for the Paris Climate Talks, known as COP 21.

Climate change has long been on the United Nations agenda. The first climate conference was held in 1979 in Geneva, Switzerland. Talks continued annually until in 1997 they launched the Kyoto Protocol- a legally binding agreement to reduce emissions. The United States, unable to approve of a legally binding agreement without congressional approval, was unable to sign on to the protocol.

Because of the missing key members, the Kyoto Protocol failed to make its intended impact. Global temperatures continued to rise. In 2013, United Nations member states agreed on Paris as the location for a new set of talks to combat the problem. They cited a goal of reducing global warming to below 2 degrees centigrade.

In the winter of 2015, conference members reached an agreement. This, Mark attributed largely to the work of NGOs and civilian activists. Marches were held worldwide on the Sunday before the conference, and 1.8 billion people signed a petition urging their representatives to combat climate change.

“There was a lot of passion and a lot of urgency,” she said of the activist community, “and that’s what kept them (the delegates) going.”

Unfortunately, many scientists worry that the accord will not have enough of an impact. The voluntary nature of the non-legally binding agreement also has some on edge. Mark said the agreement will make a difference only if civilians hold their governments accountable.