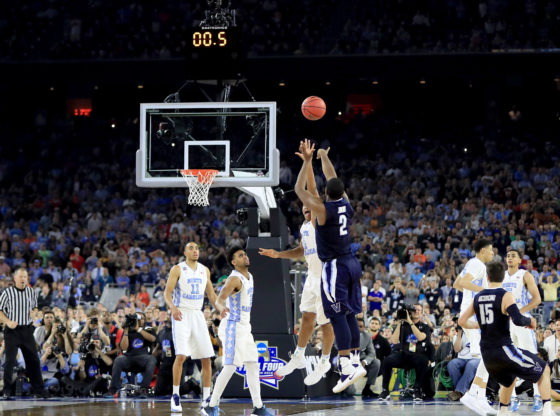 Two years ago on this day in 2016, the Villanova Wildcats defeated the North Carolina Tar Heels, 77-74 in what many consider to be the greatest College Basketball Championship Game of all time. A look back on the impressive game:

The 34-5 Villanova Wildcats and 33-6 North Carolina Tar Heels fought a tough first half where neither team led by more than five points in the first 19 minutes. In the last minute of the first half, UNC took the largest lead of the game up until that point by going ahead seven points and had the opportunity to go up by nine. After Villanova’s Josh Hart blocked a North Carolina layup attempt, his teammate Phil Booth scored a jump shot at the other end of the court as time expired, preserving a 39-34 lead for UNC at the half. UNC’s Joel Berry II scored 15 points, more than any other player. Villanova’s Kris Jenkins only played four minutes in the first half after getting into early foul trouble. UNC was 7/9 on three-point shots in the first half but missed 68% of their two-point attempts. In contrast, Villanova made 65% of their two-point attempts, outscoring UNC by an 18-12 margin in the paint in the first half.

Out of halftime, the Villanova Wildcats went on a 13-2 run to reclaim the lead at 47-41 with a little over 6 minutes left in the game. Villanova had the highest lead of the game at 10 points after going up 67-57 with 4 minutes and 47 seconds to go. After the University of North Carolina Tar Heels scored two straight field goals to fight back in the game, Villanova ultimately grabbed a 70-64 lead with 1 minute and 38 seconds remaining in the match. UNC’s Marcus Paige then hit a three-pointer to cut Villanova’s lead in half. Villanova then turned the ball right back over to UNC, where Tar Heel Brice Johnson scored a bank shot to cut the Wildcat lead to just one point. After Wildcat Phil Booth was fouled by Tar Heel Isaiah Hicks with 35.7 seconds left, he hit both free throws to give Villanova the three-point lead back. UNC’s Marcus Paige then scored a hard-fought reverse layup on his own rebound to cut the Wildcat lead back to one point with 22.3 seconds left. Villanova’s Josh Hart was fouled and then hit both of his ensuing free throws, giving the Wildcats a 74-71 lead with 13.5 seconds remaining in the game.

UNC’s Marcus Paige then hit a clutch, off-balance three-pointer to tie the game at 74-74 with 4.7 seconds remaining. Villanova then called a timeout to set up their final play called “Nova,” a three-point attempt that they claimed they had practiced every single day during the season. Villanova’s Ryan Arcidiacono received the in-bounds pass and pitched the ball back to Kris Jenkins. With less than 2 seconds remaining, Jenkins converted the pass into a game-winning, three-pointer as time expired. Villanova scored a buzzer-beating shot to defeat UNC, 77-74.

The teams combined for just 21 turnovers. Marcus Paige finished with a game-highs in points at 21 and assists at 6 for UNC. Phil Booth came off the bench to lead Villanova with a career-high 20 points and Josh Hart led the team with 8 recorded rebounds. The 2016 Villanova win was their first Championship since they defeated the heavily-favored Patrick Ewing and his fellow Georgetown Hoyas in the 1985 title game. 1985 Villanova head coach Rollie Massimino was in the audience for the 2016 win. Villanova recorded the second-highest margin of victory in tournament history after their 2016 Championship, only behind the 1996 Kentucky Wildcats team.

The game-clinching shot was the first buzzer-beater to win the College Basketball title since Lorenzo Charles’s dunk gave the underdog North Carolina State Wolfpack a 54-52 win over the heavily-favored Houston Cougars in the 1983 National Championship Game. It was also the first three-point buzzer-beater to end a national title game, with the Associated Press deeming the shot “as memorable as any [points] that have been scored in the history of this tournament.” Regarding the final shot, Villanova coach Jay Wright claimed that “Kris Jenkins lives for that moment.” Regarding the game itself, Wright remarked that it was “one of the greatest college basketball games” that Villanova had ever been a part of and UNC head coach Roy Williams called the Wildcats “worthy champions.”

UNC did not have to suffer from the loss too long, as they would win the 2017 National Championship over the Gonzaga Bulldogs less than one full year to the day later. Villanova would again win the National Championship, this time two years after their 2016 buzzer-beating win in April 2018, after they defeated the Michigan Wolverines, 79-62.