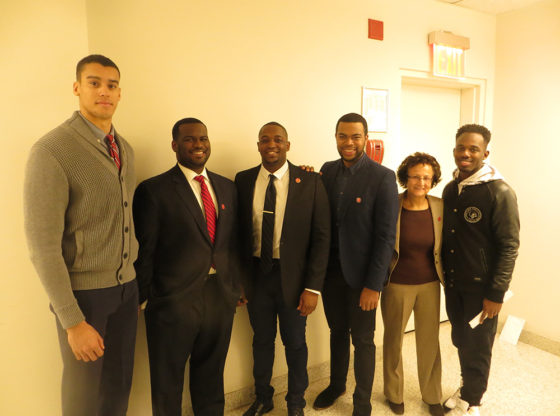 The Center for Entrepreneurship held their Peer 2 Peer Networking event in the 6th floor lounge yesterday, providing students with an inspirational talk from an alumni and giving them the opportunity to network with their fellow student entrepreneurs.

Entrepreunrship is more about who you know than what you know, the center’s Vice President Landy Guevara said.

“No one did anything by themselves,” Guevara told SFC Today. “Everybody needed someone whether they’d like to admit it or not.”

Phil Taitt – who graduated last semester – spoke about his journey to becoming a YouTube star.

Taitt explained how he started as a Business major before realizing it wasn’t for him and switching to Communications. He had a dream of becoming a talk show host, but didn’t know how to use a camera so he put together a team of people who could help him.

He talked about how he started out by interviewing small-time guests and struggled to get interviews with more well-known ones. He messaged actor Omar Miller on kik messenger app and showed up at one of his parties before Miller agreed to do an on-camera interview.

Interviews with celebrities such as singer Brandy and wrestler Kurt Angle were made possible through networking.

“Align yourself with people who can help you get to the next level,” Taitt told the students.

Now that he has more popular guests, Taitt has been able to get sponsors and make some money from his passion.

“Now I seem more like someone who is a legitimate company,” Taitt told the crowd.

It was important for the aspiring entrepreneurs to hear from someone who is a recent graduate, Guevara said.

“They can see someone who’s actually walked in their shoes become a success,” Guevara told SFC Today.

The biggest struggle for aspiring entrepreneurs is being consistent, Guevara added.