CEDENO BRINGS A SLEW OF EXPERIENCES TO ST. FRANCIS

Home /News/CEDENO BRINGS A SLEW OF EXPERIENCES TO ST. FRANCIS 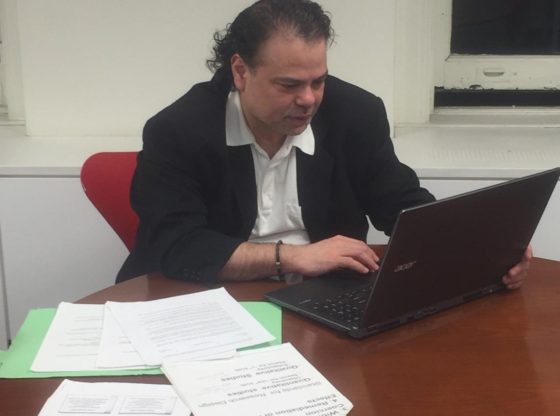 Coach, entrepreneur, philanthropist, mentor, father, cancer survivor, St. Francis graduate: call Professor Paul Cedeno whatever you want, but the Queens native is nothing if not dedicated.

“I have the opportunity to bring all of these experiences into the classroom,” he said. “This is my mission.”

Cedeno has been an adjunct professor of sociology at St. Francis for two years now, after having taught in Catholic schools for 10 years and the New York City public school system for 6 years. He is also the founder of a unique non-profit organization based in East New York, Brooklyn. Cedeno started the academic sports program, called Youth Stars, in 2004 in concert with the Catholic Youth Organization.

Youth Stars is a family-orientated organization that focuses on students’ grades first, creating an intervention program at an early age and teaching them the discipline they might not find at home. Cedeno monitors their report cards and also coaches them on the basketball court.

Cedeno mentioned that throughout his years of teaching, he has seen the New York City public school system’s attempts at preparing students for higher education. “I see the attempt at the public school level for college readiness,” he said. “I’ve seen it work and I’ve seen it not work. Common core works in some places and not in others.”

“By creating a non-profit organization, I am focusing on academics first, and then sports,” Cedeno said. “That mindset allows students to potentially get into schools like St. Francis College that offer Division-I sports programs.”

Cedeno inadvertently discovered his love for teaching at a family party when a close family friend mentioned how well children respond to him.

And thus a lifelong career of teaching, mentoring, and coaching began. Cedeno pursued dual degrees at St. Francis, one in Sociology and the other in Criminal Justice. He is a proud member of Alpha Kappa Delta—the International Sociology Honor Society—a scholarly organization dedicated to the advancement of sociological research.

He then went on to receive two Master’s degrees in Education—in both Special Education from Touro College and Curriculum and Teaching from Fordham University—in order to become a teacher.

The support Cedeno received from his St. Francis family during his pursuit of his undergraduate degree was unparalleled. As a young newlywed and new father, Cedeno’s college experience was different from most. But the encouragement he received from his professors was unwavering, especially when he received devastating news: a cancer diagnosis.

Cedeno was forced to withdraw from school. After a full recovery, he returned in pursuit of his eventual degree, despite originally not knowing what he wanted to do with his life, and changing his major four times while at St. Francis.

“If there was a list of people who changed their major,” Cedeno joked, “I would top it.”

Much of Cedeno’s compassion for various students’ schedules and circumstances stems from these difficult experiences he had as a college student.

He commends the school for becoming a support system for him through his tough schedule, his recovery, and his eventual return. He also applauds St. Francis for encouraging him to pursue his degree in education, leading him to his involvement in the dioceses, and teaching him integral skills like time management and the ability to delegate.

Cedeno reminisces about his days as a student here every day when he walks through the halls, and when he teaches he sees himself in many of the students he interacts with at St. Francis.

His ability to connect with young people through coaching and mentoring sets Professor Paul Cedeno apart from the rest. His passion for teaching has resonated through the halls of St. Francis since his earliest days here as a young student, and it continues to be felt today, almost 20 years later.