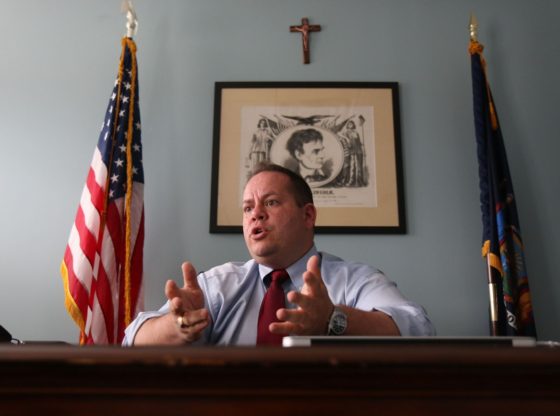 SFC alumnus Ron Castorina Jr. has been climbing the ladder of New York lawmakers for the entirety his impressive 16-year career, eventually landing in his current spot as an assemblyman representing the South Shore of Staten Island.

Castorina holds a double major in Political Science and Philosophy and a minor in History from SFC, as well as a law degree from the University of Buffalo. After his graduation in 2001, he began his ascension to becoming the powerful community-based humanitarian he is today. “A lot of the values that I maintain,” Castorina said, “Come from the Franciscan background that I learned and developed during my time at St. Francis College.”

Castorina began his impactful career when he opened his own law practice in 2006, after having worked in the Supreme Court of New York State as a clerk for three different judges. “During my time in private practice, I brought certain actions pro bono on behalf of my community,” the assemblyman told SFC Today, “Particularly a case in 2008 where the city took away school bus service from 7th and 8th graders throughout Staten Island and Queens. I sued the mayor, the City of New York, and the Department of Education, and I was successful in getting school bus service restored to those students.”

Castorina was subsequently appointed Commissioner of the New York City Board of Elections for Staten Island, and it was during his tenure there that he took on another landmark case.

Approximately two years ago, a Congressional seat that represented 750,000 citizens in Staten Island and Brooklyn fell vacant, and the Governor failed to call a special election to vote in a delegate for the district. Seeing the inherit unfairness of leaving so many people without representation, Castorina took action.

“I decided to sue the Governor in Federal Court,” he said. “I thought it was incumbent upon me as an attorney and a member of the community to seek justice for what I felt was a real big injustice—the disenfranchisement of three-quarters of a million people—and I was successful.”

He won the case, and the people were awarded the Congressional seat that was rightfully theirs.

A year after his victory in that case, Castorina became interested in running for the assembly seat in Staten Island. He was elected in April of 2015 and has been working with the state government in Albany ever since.

He was reelected to the Assembly in September, winning with an impressive 70% of the vote. His next election is the November primaries, and he is running unopposed. “Since I have no opponent,” Castorina joked, “As long as I go and vote for myself, I should be OK.”

Castorina has a laundry list of initiatives he is working on for the upcoming election as well as what looks like will be his inevitable next term. “Right now, the major issue is the heroin epidemic,” he said, “I’m trying to infiltrate education in the schools to get young people to make the right decision against it, working with law enforcement to make that we get the suppliers, and I’m also working to find compassionate and helpful ways to get addicts clean and helped by encouraging mental health services and drug rehab.”

He continued, “I’m looking to increase the penalties for possessing certain quantities of heroin. If somebody is a dealer they should not be eligible for drug treatment in court. I’m also looking to have those dealers who cause the death of an addict via an overdose held criminally liable for the death.”

He is also fighting against common core in Staten Island schools, asserting that Staten Island parents—not big government—know what is right for their students.

Another huge project he is tackling is the transportation nightmare that many commuters from Staten Island’s South Shore face, with Castorina contending that it is easily the worst in the entire country. He is working on legislation to improve bus service through New Jersey and into Manhattan, and his project of “twinning” the Outerbridge Crossing—building a parallel structure next to the existing bridge to accommodate an extra six lanes of traffic—is already in its early stages.

Many motorists are also faced with the daily struggle of red light traps throughout their neighborhoods. Where there are red light cameras, Castorina said, there are shorter yellow light times, intentionally setting up drivers to get ticketed. He is currently working on an initiative to have a mandatory yellow light time of four seconds in order to clear up confusion and assuage disgruntled commuters.

“I have so many [initiatives],” Castorina joked, “There’s probably another dozen bills and issues that I’m working on.”

He echoed the true Franciscan spirit by saying that the most important aspect of the way he lives is his personal motto, “Service above self.”

Castorina’s personal adherence to these values is evident in the legislation he passes for his fellow residents of Staten Island. In the very fabric of his work is woven a picture of a man whose Franciscan spirit continues to burn bright.

“If you’re always concerned about doing good and doing right,” Castorina said, “Then you’ll never have a problem.”