CAPTAIN, MY CAPTAIN JETER CAN SEIZE THE DAY

Home /Sports/CAPTAIN, MY CAPTAIN JETER CAN SEIZE THE DAY 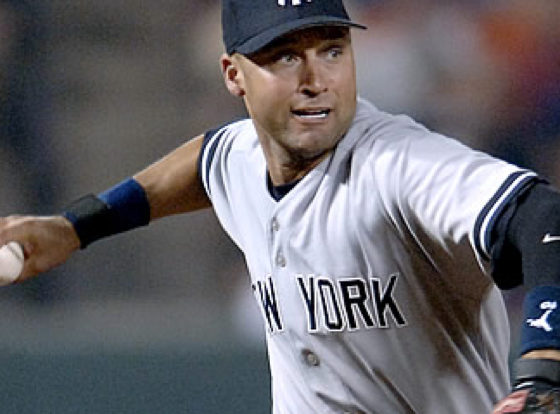 Once again, Mr. November a.k.a. Derek Jeter has led the New York Yankees to another promising World Series.

“The Captain” has performed outstandingly in the 2009 playoffs by posting .297 batting average that is complimented with 3 home runs and 5 runs batted in.
Jeter now has to lead his team against the defending World Series Champions, the Philadelphia Phillies.

If the Yankees play to their potential, the franchise will achieve an historic 27th World Series Title.

Jeter was born in Pequannock, New Jersey but resided in Kalamazoo, Michigan for most of childhood.

As a teenager in high school, “The Captain” was always an aspiring prospect to the MLB. Jeter was highly recruited by the Yankees organization in his senior year of high school.

After a lot of thought, Jeter chose not go to the University of Michigan and was picked 6th overall in the 1992 draft for Major League Baseball.

Some scouts criticized the young, ambitious shortstop for not developing his full potential in college. Jeter then proved all the critics wrong by having an outstanding season, posting .344 batting average in a Triple A’ affiliate in Columbus.

Jeter would eventually win “The Overall Minor League Player of the Year” in 1995. That year Jeter was called up to the major leagues.

In 1996, then Yankees manager Joe Torre felt that Jeter was skilled enough to be the Yankees’ every day starter at shortstop. Jeter took full advantage of this opportunity by hitting .314 in his first full season in the majors.

The major league awarded “The Captain” the honor of being the “American League Rookie of the Year.” In that same year Jeter was a significant factor in winning the 1996 World Series.

Jeter reminisced about how he has played with Andy Pettitte, Jorge Posada, and Marino Rivera all through the Yankee organization. Jeter told MLB.com: “We made it look easy … but it was hard then. It feels sweet to be back.”

The series against the Phillies will be far from easy because Philadelphia is on a mission to be the only National League team to win back-to back championships since 1975-76, when the Cincinnati Reds played against the Tampa Bay Rays.

Will it be another triumph for Mr. November? The grudge match that involves Broad St. vs. Broadway will start on Wednesday, October 28, at 7.57pm.

Game One will be an interesting match up of two southpaws — C.C. Sabathia vs. Cliff Lee — that came from the Cleveland Indians organization.

OPINION: WHY DO AMERICANS HATE THE BEAUTIFUL GAME?
HERMAN WRICE’S LIFE OF AN SFC BASKETBALL PLAYER