Out with the old, in with the new: SFC redesigns

Home /News, Opinion/Out with the old, in with the new: SFC redesigns 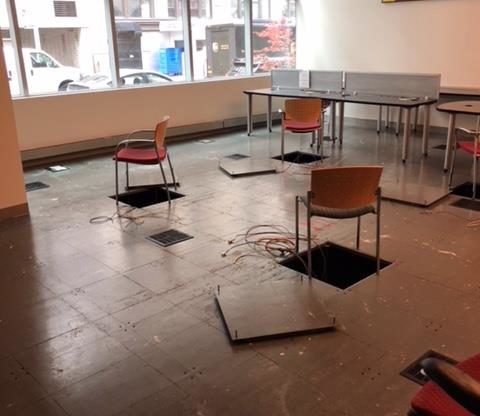 For those who have been on campus throughout the summer, the changes at SFC are hard to miss.

While some of the changes are relatively minor and don’t concern the students, other redesigns are leaving the students with strong disapproval.

The first change SFC students were shocked to see was the closing of the bookstore.

At the end of the spring semester, as St. Francis approached the end of its partnership with Barnes and Noble, the bookstore was getting rid of everything on its shelves.

During its final days, all remaining merchandise was given away free of charge to speed up the store closing.

“It’s good that they’re getting rid of the bookstore. It wasn’t lucrative for the school, and no one would go there anyway,” says SFC junior Mark.

While the bookstore may have brought the college little revenue, we must admit, it’s a bit sad to see it gone.

Another change that students noticed was the closing of the first floor computer lab in the library.

According to some, this raises many problems.

“Now the whole second floor [lab] is going to be packed. Everyone’s going to be fighting to get a computer,” said a student worker for the IT department.

“It might not look so bad in the summer, but once the semester starts, it’s gonna be chaotic down there. I can’t even imagine how things will be during activity periods.”

Although the removal of the computer lab distresses Terriers, there is some speculation that the library will be revamped. The planned redesigns include creating more room for computers as well as new furniture.

One the other hand, business major Chris has been bothered by the removal of the Macs in the Volpe Lounge.

“I don’t know why they removed those Macs. They were actually useful when I wanted to check something … I mean most of them were slow 90% of the time but still.”

This poses the question: If technological devices are not functioning properly, why keep them? Why should SFC students have to suffer from slow Macs?

Some Terriers appreciate the removal of the Macs from the lounge.

“I like how they’re getting rid of those Macs. Nobody used them anyway. In the amount of time you spent waiting for the home screen to load on one of those Macs, you could’ve went to a computer in the library, printed your work, stapled it, and put it in your professor’s mailbox.”, says Nick, a rising senior.

“Maybe they’ll replace those Macs with actual working ones,” he continued.

Nick is in fact correct – SFC seems to have ordered new technology for the students, specifically, new computers for several computer labs throughout the building.

When asked why he thinks the college is implementing all of these new changes, Nick’s answered,

“Maybe they saw that enrollment was low and realized that they can’t keep running the school on garbage technology.”

By upgrading its technology, SFC not only improves the experience of current Terriers, but secures satisfaction for future students as well.

Clearly, SFC is out with the old, and in with the new.

It’s great news that SFC is revitalizing and making sure that the students and faculty get the best out of the campus.

Although change may be hard for some to accept, it is important to keep in mind that the changes keep the student’s best interest at heart.