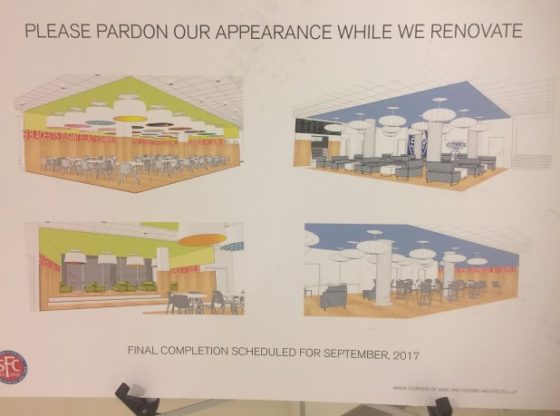 The cafeteria is getting a much-needed overhaul. Aside from some minor touch-up work, the first phase of the project is finished, and students can expect the entire renovation to be completed by September 2017.

In addition to the new tables, chairs, and extra electrical outlets already put in place, there will be a new combination coffee and grab-and-go sandwich station in the area that the Campus Ministry used to occupy. Aquista’s will also have a new flow to it that will hopefully make picking up and purchasing food easier for students.

Both of those major changes are anticipated to be completed during the Spring semester.

There will also be new lighting and flooring installed, and the walls of the McArdle Student Center will be painted with fresh, vibrant colors. New artwork will be added to the space as well. The projected schedule for this phase of the renovation is still to be announced.

SFC was prompted to begin the renovation after a mountain of negative feedback poured in from students on the most recent student survey. Complaints included uncomfortable seating and a lack of places to charge phones and laptops. The administration decided that there were several quick and easy ways to fix these problems, and thus the area’s makeover began.

The budget for the upgrades is coming out of the school’s general funding that it sets aside for any needed renovations on campus, like the various recent renovations on the fifth floor and any miscellaneous classroom fixes. A portion of the budget also came from Student Activities who, in accordance with tradition, has paid for new furniture for students several times over the years.

“It’s comfortable in the cafeteria now because of the seats,” student Rejeanne Smith told SFC Today, “But I would prefer they work on the second floor because it’s easier to leave class and be with your friends there, and you never really see people in the cafeteria that much.”
The changes have been generally welcomed by students, though similar improvements could definitely be made throughout SFC’s entire campus.

SFC TROUPERS TAKE THE STAGE WITH “ASSISTANCE”
WHO, WHAT, WHEN, WHERE, WHY: THE RETURN OF THE W TRAIN