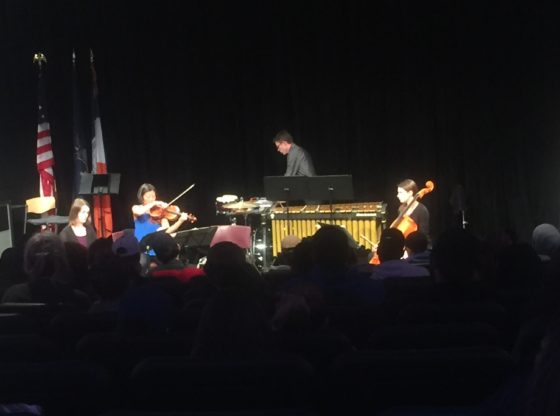 On Monday, April 4 The Department of Fine Arts welcomed the Cadillac Moon Ensemble in the latest event for the Concerts at Half-Past Twelve series.

The group was formed in 2007 and has since commissioned hundreds of works from New York City’s up-and-coming and innovative composers.

Throughout the performance, Michel showed her musical talent, playing several instruments including the bass flute, the alto flute, and the piccolo.

The first piece the group played is titled Forces to be Reckoned With by composer Samuel J. Crawford. It was composed specifically for Cadillac Moon Ensemble. The piece focuses on an extremely relevant topic for today’s youth: the inundation of stimuli from social media. With this piece, Crawford asks the listener the question, “Are we, in fact, the ‘force to be reckoned with’ or is it our computer?”

The second piece, Trade Secrets, was written by composer and friend of the group Timo Andres, and is centered around a simple melody that Andres wrote on an airplane.

The perfect nothing catalog —a five-movement piece comprised of 50 separate miniatures— was the last piece performed by the quartet. Written by Conrad Winslow, the piece contains unorthodox instrumentation, with all for players utilizing the sounds of unconventional materials like zippers, Velcro, and even the beeps of an iPhone app.

The free-flowing, organic piece has five movements separated by the four players stomping their feet.

Michel commented that the perfect nothing catalog is her favorite piece to play. “It’s fun switching back and forth between instruments,” she told SFC Today.

The quartet will be performing at several other universities throughout the year.

The Half-Past Twelve series at St. Francis will continue on April 11 with a performance by the Brooklyn Ballet in Founders Hall.

LATIN AND PROUD: CONGRESSWOMAN NYDIA VELÁZQUEZ STRIVES TO GIVE A VOICE TO THE UNDERREPRESENTED
SFC HOLDS CAREER FAIR