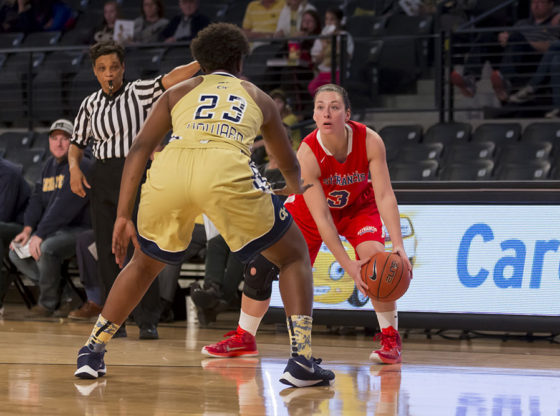 This victory gives the Bulldogs a perfect (6-0) record in NEC play to go along with their (9-8) overall win/loss tally. With this loss, the Terriers now fall to (3-14, 0-6 NEC) for the season, and this game marks their sixth consecutive loss.

Along with Rucker’s 23 points, the NEC’s leading rebounder (10.7 per game) grabbed four boards. The senior forward built up her scoring output behind the strength of 7-of-10 shooting from the floor (70%), which included nailing her only three-point attempt, and she drilled in all eight of her free throw attempts.

In the game itself, both teams duked out a competitive first quarter, which ended off in a 19-13 Bulldog lead. The Bulldogs then showed their bite out of the break by piling on 13 consecutive points, marking a cumulative 15-0 scoring run to put them ahead 34-13.

The Terriers showed signs of life later in the second quarter by notching up seven points down the stretch, but the Bulldogs entered halftime with an emphatic 40-20 lead.

The Bulldogs continued to fire on all cylinders and eventually picked up the 70-42 win over the Terriers.

“They’re (Bryant) very good,” coach Thurston said. “They play together, they play hard, they execute, there’s no look of fear in their eyes, they go after every rebound, and they challenge every shot.”

The Bulldogs played an efficient game by displaying prolific shooting all over the floor. They converted on 53.6% of their field goals, 47.8% from three-point range, and 82.4% from the foul-line.

The Terriers ended the game shooting 31.5% from the floor, and 16.7% shooting from three-point land.

“Their defense was definitely a testament to what a great team they are,” said senior guard Taylor Watson. “We have a tendency to rely on the three – when it doesn’t go in, we’re at a loss,” Watson said. “It’s something we recognize that we need to work on as a team, so it’s something we try to get better at each day in practice.”

For the Terriers, it was Watson who served as the driving force. When given the opportunity to play a career high 14 minutes, Watson scored a career best eight points, which was also tied junior forward Olivia Levey for the team lead.

“The one thing I was happy with; I can’t tell you how thrilled I am that Taylor (Watson) came off the bench without having played, and she looked like our best player.” Coach Thurston said. “I was proud of the effort that she gave, I’m extremely happy for her.”

“It was nice to get some minutes, but overall I’m just looking at it from the perspective of the team,” Watson added. “Although we played the best team in the league today, I think we could have done better within ourselves, and that’s why I’m disappointed the most.”

The Terriers will be back on the road for their next game, as they’ll face the rival LIU-Brooklyn Blackbirds on Saturday, January 23.