BROOKLYN’S LANDLORDS ARE THE WORST IN NYC

Home /News/BROOKLYN’S LANDLORDS ARE THE WORST IN NYC 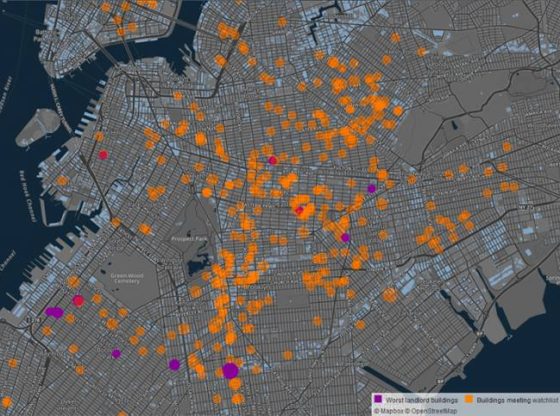 Public Advocate Letitia James has released the annual list for the shoddiest landlords in New York City, and Brooklyn was unsurprisingly named the worst borough with approximately 200 buildings making the list.

The Worst Landlords Watchlist is compiled based on the amount of violations tenants call into the Department of Buildings (DOB) and NYC Department of Housing Preservation and Development (HPD), and the amount of citations the landlords and management companies subsequently receive.

With the chill of winter on the horizon, complaints have been pouring in from tenants across Brooklyn about issues with heating in their apartments. These grievances come on top of the already prevalent cases of mold, bedbugs, collapsing ceilings, leaky faucets and toilets, shabby sprinkler systems, broken gas pipes, and faulty elevators.

“Every tenant deserves to live in safety and security and every apartment needs to meet basic standards of decency,” James said in a statement.

The Worst Landlords Watchlist initiative was started in 2010 by Mayor Bill de Blasio — who was then serving as the city’s Public Advocate — and is designed to shame landlords into improving the living conditions in their buildings. The initiative’s website even features a search tool that allows visitors to search their address in the system and view their building’s open violations.

“The Watchlist identifies the landlords in our city who are neglecting and harrassing tenants and puts them on notice,” the Public Advocate added. “We will not tolerate this type of behavior in New York City.”

1985 Ocean Avenue, only a short walk from the aforementioned building, was the second most cited building in Brooklyn with 332 violations. This building is operated by 1985 Rubin LLC management.

Both companies declined to comment to any media outlets on their spots on the Watchlist.

The heavy volume of Brooklyn buildings on the list comes as no surprise to most Brooklynites. Throughout the many years I have spent living here, I have dealt with many a scummy slumlord.

In 2007, I was living in East Flatbush in a building absolutely infested with various critters. The water bugs and roaches would emerge from cracks in the floors and walls anytime the lights turned off, and the boiler would periodically stop working due to lack of maintenance, so there was no heat. When my brothers and I left to visit our friend for a week, we returned to a boarded-up door and an apartment that was torn apart. Without our knowledge or consent, the landlord had the building’s Super tear out the toilet, kitchen countertops, and otherwise rip apart the apartment so the materials could be used for other projects in the building.

We immediately contacted the police. However, landlord-tenant disputes are not exactly at the height of the NYPD’s priority list. We sat on the stoop waiting for them for almost two hours. The police proceeded to take the receipt of payment from that month’s rent, document it in an official report, and tell the landlord and Super that we had the right to enter the apartment and remain there, but the conditions were unlivable. Our landlord was summoned by the police, and he proceeded to tell them that he had no idea what had happened, despite the fact that thr Super told the police that he was told to board up the apartment by the management company and the landlord himself.

Several years later, another management company that ran a building I lived in neglected the building’s boiler for almost three months, leaving the tenants without heat. We had to turn on the shower at night so the hot steam would flow throughout the apartment and keep us from New York’s freezing winters.

My most recent landlord told us that the management company was exterminating the building and that they were going to spray for roaches, mice, and bedbugs. On the surface, this sounded great, but we had to leave our keys with them for a week so they could access the apartment to spray. I declined because I did not feel comfortable handing over my keys to a random person and just as I had assumed, several people in the building had items “go missing” from their apartments during the spraying periods.

Brooklyn’s spot as number one on the Worst Landlords Watchlist is all but expected for most longtime residents of the borough. The borough’s reputation as slumlord central is finally being publicized and will hopefully garner positive results from readers of the report and spur a positive change for tenants across the city.