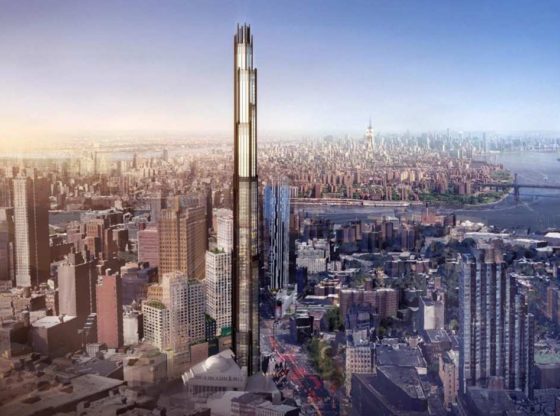 Developers last month filed plans for a 1066 foot tower in Brooklyn that would be considered the borough’s first skyscraper.

With its planned location on 9 DeKalb Avenue in Downtown Brooklyn, the slender skyscraper would be more than double the height of all current buildings in the borough. It would also be the third tallest building in New York, after the Freedom Tower and the Empire State building.

“We’re really excited to give Brooklyn a building that isn’t bashful, that isn’t shy,” said Michael Stern, managing partner of JDS development group, which along with the Chetrit Group is one of the tower’s two developers, according to the New York Times. “We want this project to encapsulate everything that is great about Brooklyn’s past and everything that is great about Brooklyn’s future.”

Plans for the 73 story edifice were drawn up by SHoP architects, best known for designing Brooklyn’s Barclays Center. The plans involve resting the tower on the rear of the adjacent Brooklyn Dime Savings Bank.

The proposed structure would take advantage of Brooklyn’s ever-increasing real estate value with 500 apartment units and space for street-level retail.

There are, however, potential obstacles the developers of the building.

First would be the necessary demolition of the Brooklyn Dime Savings bank, where part of the skyscraper will rest. As the bank, built in 1908, is a New York City landmark, the Landmarks Preservation Commission will have to approve the developers’ plans. A hearing has been scheduled for March 15th.

The main sticking point, however, may be the stupendous height of the building, in a city where such tall structures have been previously confined to Manhattan.

“Yes, the city planned this for a new Brooklyn,” Municipal Art Society President Gina Pollara said according to the New York Times. “But does the public really understand what the cumulative effect of all these towers will be on the public realm?”

If the developer’s plans are approved, New Yorkers can expect to see the skyscraper built by 2019.