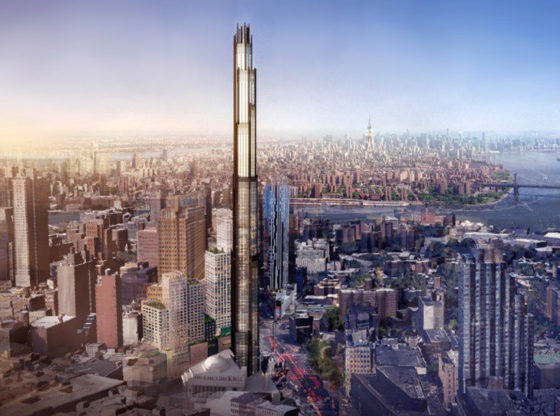 The 73-story apartment tower — which would be considered Brooklyn’s first skyscraper — was proposed by SHoP architects and approved by JDS development group in February.

The tower would stand at 9 DeKalb Avenue and measure about twice as high as most of the borough’s buildings.
500 residencies would occupy the skyscraper, but details about their quality and pricing has not been released.

It will be built on a portion of Dimes Savings Bank of Brooklyn, located next door to the site. The bank — built in 1908 — is a city landmark which allows for 300,000 square feet of air rights.

Landmarks’ approval was needed to alter the bank, which will also house new shops as part of the deal.

“To me, this project is enlightened urbanism at its best, where old and new are combined, where short and tall are combined in juxtaposition,” Frederick Bland, a landmarks commissioner, said during a hearing at the Municipal Building, accoridng to the New York Times.

Despite Bland’s opinion and the Landmarks’ approval, others oppose the idea.

“Yes, the city planned this for a new Brooklyn,” Municipal Art Society President Gina Pollara said when JDS approved the project, according to the New York Times. “But does the public really understand what the cumulative effect of all these towers will be on the public realm?”

The tallest building in Brooklyn at the moment is 388 Bridge Street, a residential tower a few blcoks from the DeKalb Ave site, which only reaches 590 feet.

Only about eight of the buildings in all of New York City measure 1,000 feet or higher. However, about two dozen 1,000-foot plus buildings are being planned at the moment, according to the New York Times.

Developers hope to have the project completed by 2019.