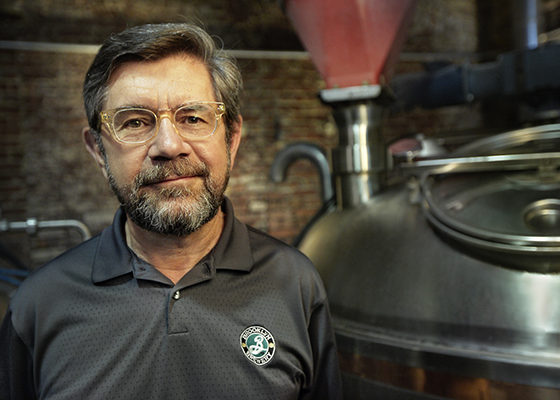 Brooklyn Brewery is now the 11th largest craft brewery and the biggest exporter of American beer. But Hindy didn’t start his life as a brewer- he spent much of his early life in journalism.

Hindy landed a job with the Associated Press, operating as their Middle East correspondent in Beirut. It was during his travels to the Middle East, where Islamic law criminalized the sale and consumption of alcohol, that Hindy first encountered home-brewing of beer by locals.

Upon returning to the states, he took a job as Newsday’s assistant foreign editor. During that time he began brewing his own beer. He convinced his neighbor, Tom Potter, to join him in starting a brewery. The two quit their jobs and founded the Brooklyn Brewery.

Hindy acknowledged early on that the market was challenging for independent brewers at the time. “We’re not gonna compete with Bud, Coors and Miller,” said Hindy. Instead, they looked to compete with European brands.

First, they needed a product to sell. The two decided to name the beer “Brooklyn Eagle Beer”. Having created a test brew, the pair looked to designer Milton Glaser— the man behind the infamous “I Love New York” visuals— to design their packaging and logos. Glaser’s first contribution was to shorten the name to “Brooklyn”.

Brooklyn was a much different place in the late 20th century. Crime was higher and the city was a settling place for blue-collar workers, making the borough an “underdog” of sorts. The name, because of the nature of Brooklyn at the time, could have different connotations, and many questioned whether the city name was good for a beer. Hindy, a Brooklyn transplant himself, stood by the name, saying it seemed authentic and simple.

With a sense of authenticity thus imbued in their brand ethos, Hindy and Potter took to the streets, distributing their own beer. Lacking a large marketing budget, the pair took an unorthodox approach. Instead of taking out ads on tv or in newspapers, they donated beer to art organizations, not-for-profits, and other community organizations.

The brand took off, as did craft beer. Today, craft beer is the only sector of the beer market that is expanding. Its profitability has led many large brands to acquire smaller craft beer brands, or start their own. Constellation, a large wine distributor, recently purchased craft beer manufacturer Ballast Point for $1 billion dollars.

Today’s Brooklyn Brewery is even larger than Ballast Point. They operate a large brewery in upstate New York with plans to expand to Staten Island. Brooklyn Brewery beers are currently sold in 25 states and 20 countries. Still, 1/3 of their beer is brewed right here in Brooklyn. This is no coincidence. Both locally and abroad, Hindy said, the name Brooklyn provides, “the kind of authenticity the big guys really can’t match.”

Monday’s event was a part of the Thomas J. Volpe lecture series, a series that aims to connect students with role models in the community. The next lecture in the series will take place in February.