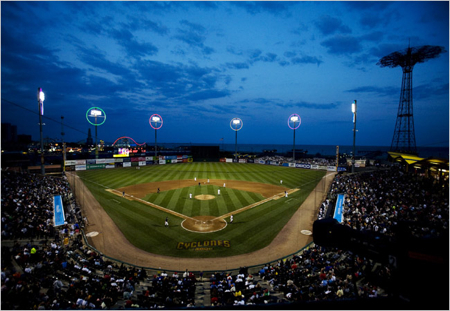 Many Brooklynites have been to a Cyclones game or two, but did you ever wonder who the boys are handing the players their bats and giving the umpires a new ball? One of those boys is Andrew Scholl.

Andrew has been a batboy for the Brooklyn Cyclones for two years. His job includes everything from cleaning the players’ clothes to carrying a player’s sports bag to the dugout.

The job is not glamorous at all. Andrew must arrive hours before the game and is the last to leave when a game is over.

Andrew is one of three batboys for the Cyclones. The boys usually switch off working for the home team and the away team. They do not travel with the team so they only have to work when the team is playing in Brooklyn.

Andrew has the opportunity to work with future baseball stars and has even worked for major league baseball players.

When a player in the majors is hurt or is not performing well they are sent down to the minors. The Brooklyn Cyclones are the Mets’ minor league team so the players who are sent down are from the Mets.

Andrew has worked for players like David Wright, Carlos Beltran, and Angel Pagán. He claims his favorite player to work for from the majors was David Wright. “He was really nice and down to earth” said Andrew.

“Working with the Cyclones has taught me about the sports industry. It was a good experience for me to have,” said Andrew. Andrew hopes that his experience will help him get a job working with sports teams when he finishes college.

“When I got the job I thought I would just have to run after baseballs, but it’s more than that,” Andrew said. He is committed to the job because he is so interested in sports. For a non-sports fan the job might get tedious after a while, but Andrew enjoys it even after all the games he has worked.

Andrew is not only a baseball fan but he is enthusiastic about almost any sport. Currently he is a senior at Xaverian High School. He is on the varsity football team and plans to major in Sports Management in college. Andrew is currently anticipating graduation and plans to go away to school next year.