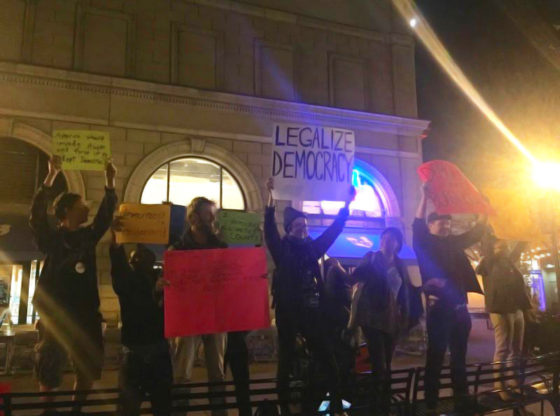 Outraged by Tuesday’s primary voting issue, a group of protesters stood outside the Brooklyn Board of Elections in Brooklyn Heights Wednesday night condemning the incident.

The protesters projected a message on the side of the building near 345 Adams Street reading “Where Are Our Votes?” Another message stated “BOE: We Want Answers Now!”

The group going under the hashtag #nyprimaryproblems called for political officials to take responsibility to protect New Yorkers voting rights.

“There’s a massive allegation of voter oppression. We have signs up asking where were our votes. This is not a Bernie rally or Hilary rally. We are bipartisan. This is for New Yorkers who were denied their constitutional right to vote,” Eli Kaye told SFC Today.

During Tuesday’s primary, it was reported that more than 126,000 Democratic voters were purged from the voter rolls in Brooklyn. Voters from Staten Island, Queens, Bronx and Manhattan also complained of issues at poll centers. New York Attorney General Eric Schneiderman hotline received approximately 562 complaints between 6 am to 9pm, four times the volume of calls during the 2012 election.

“People were sent to voting sites that did not exist, people who were told they were not registered with a party and denied what they had every right to do which is to cast their vote. This is not how New York does it; this is not how the United States does it,” Kaye added.

Individuals complained about not being registered to vote and not being able to vote under their party for the primary. Some voters including Election Justice USA, a voting rights organization, filed an emergency lawsuit against the state to allow non-affiliated voters to cast their ballots. The organization also plans to go to a Federal District Court to protect provisional ballots.

According to a Board of Elections official the purge was due to regular maintenance of rolls under state laws, requiring officials separating inactive and active voters. Schneiderman prompted an investigation into the alleged improprieties by the Board of Elections.

“I am deeply troubled by the volume and consistency of voting irregularities, both in public reports and direct complaints to my office voter hotlines,” Schneiderman said in a statement.

“Voting is the cornerstone of our democracy, and if any New Yorker was illegally prevented from voting, I will do everything in my power to make their vote count and ensure that it never happens again,” he said.

“I am calling on the Board of Elections to reverse the purge and update the lists using the Central, not Brooklyn borough. The perception that numerous voters may have been disenfranchised undermines the integrity of the entire electoral process and must be fixed,” he sated.

In response to the issue Stringer announced that he would audit the city Board of Elections.

“There’s nothing more scarier in our nation than the right to vote, yet election after election, reports come in of people who were inexplicitly purged from polls,” he stated according to the New York Times.

After years of voting issues protesters are skeptical of the solutions for the ongoing problem.

“After the primary I am voting independent, because what they are doing is illegal. They are killing a democratic party and our basic American right as citizens,” said protester Leonory Rodriguez.