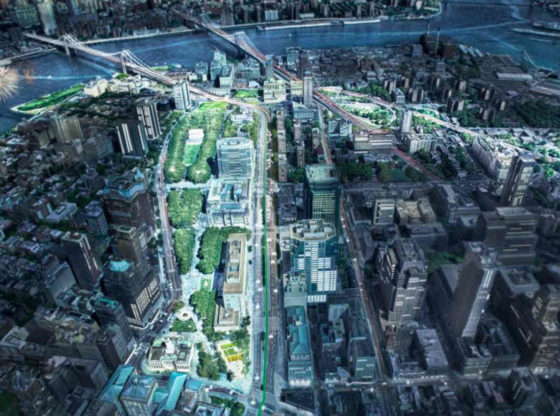 Downtown Brooklyn businesses received a boost after winning a state competition to rejuvenate the neighbourhood.

According to Cuomo, the “investment will connect cultural hubs to surrounding neighborhoods and further expand job and economic opportunities in the region, creating a stronger, more viable Brooklyn for generations to come.”

Reporter Julianne Cuba wrote that “The Downtown Brooklyn Partnership, Borough President Adams, and the Dumbo Business Improvement District plan to use a chunk of prize money to kick-start their ‘Brooklyn Strand’ plan, which would construct a series of public parks and public spaces, making America’s Downtown even more walkable.

“The Beep and the two business-boosting groups outlined in their application three areas from Borough Hall to Brooklyn Bridge Park where they’d like to improve bike and pedestrian pathways, as part of the long-term initiative created by the Downtown Brooklyn Partnership”.

Regina Myer, head of the Partnership, called the award “incredibly gratifying”, and appreciates the State recognition of
“the Brooklyn Strand’s promise and potential to connect Downtown Brooklyn residents with jobs and to help create a public realm worthy of the significant public and private investments made in Downtown Brooklyn.”

The Brooklyn Strand project will consist of several phases.

The plan is to remove the fencing that surrounds the park along Navy Street, install more lighting in the fields, and lay down a track.

There is also talk of creating a new public plaza at the intersection of Tillary and Navy streets.

According to Borough President Eric Adams, the next phases would focus on Park Avenue – where there may be a new crosswalk at St. Edwards Street that would connect the Ingersoll and Whitman Houses with Commodore Barry Park -, new seating and lighting, outdoor WiFi and charging stations, plants, enhancing bike networks and improving pathways for two-wheelers and pedestrians.