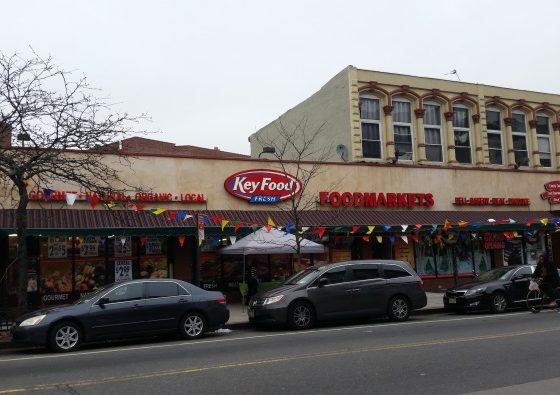 Eighteen years after Bigge Small’s unsolved death, Brooklyn is still paying tribute to the late rapper by painting a mural of him in Clinton Hill.

The mural will be painted outside of Key Food market on Fulton Avenue, where the late rapper used to bag groceries.

Brookyln street artist Danielle Mastrion is slated to do the painting. Mastrion also painted a mural of the Beastie Boys on the Lower East Side last year.

Mastrion knew there was only one way to paint Biggie Smalls — focusing on him growing up in the neighborhood as Christopher Wallace, before becoming Notorious.

“This is about his roots and not the rap icon that he became,” Mastrion said according to DNA Info. “It will be of him as a child sitting on the steps of his brownstone, like any other kid in the neighborhood.”

Though this is one of several ideas the artist came up with, another is to, “portray Biggie as a shadow on the corner of St. James and Fulton and the neighborhood will be the focus, not him,” according to DNA Info.

However, this isn’t the first mural dedicated to Biggie—there are several all around Brooklyn and Queens.

Key Food owner Rocky Widdi said the market is an ideal location because that is where the Brooklyn rapper used to work.

“Biggie was like all the other neighborhood kids—hanging around in the summer, asking if he could bag groceries for tips,” Widdi said according to DNA Info. “That’s what the kids around here used to do.”

This effort is being organized by Leroy McCarthy, who is also pushing to have the street corner of St. James Place and Fulton Street named Christopher Wallace Way — where Biggie grew up.

McCarthy should not hold his breath, as community board members were quick to veto naming the corner.

“This is where he’s from,” he said according to DNA Info. “Growing up everything he did and everyone he knew was in this five to seven block radius — this mural will honor that history and help keep it alive.”

The mural will be located on the sidewall of the apartments above the Key Food. It is expected to take three days and will be completed by the end of the month.