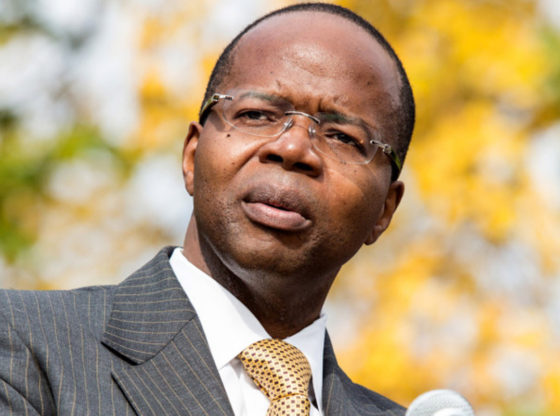 The 50-year-old announced that he was taking a leave of absence to battle the disease four days before going into cardiac arrest.

Thompson – the borough’s first black DA – was out of the office for two months prior to his official announcement.

Colon cancer affects more than 200,000 people a year and is most common in men over the age of 50. The cancer usually shows no symptoms in the early stages, but can be detected with a screening and treated in as little as six months, according to the American Cancer Society.

The DA was suffering from an aggressive form of the disease, authorities said.

“With a heavy heart, the family of Brooklyn District Attorney Ken Thompson announced that the District Attorney passed away today after a hard fought battle with cancer,” the DA’s family said in a joint statement Sunday.

Before Sunday, Thompson was hopeful of beating the illness and returning back to work.

“I thank you in advance for your prayers and look forward to rejoining you on the battlefield for justice,” Thompson said in his October 5 statement.

Appointed as Brooklyn’s first black DA in 2014, Thompson brought justice to the wrongfully imprisoned and improved the criminal justice system in Brooklyn. He also established the Young Adult Bureau in spring 2016, which takes care of misdemeanors caused by defendants between the ages of 16 and 24. Funded by the Smart Prosecution grant from the U.S. Department of Justice, this offers alternatives to incarceration of young offenders.

“Ken was a dedicated public servant who embodied the highest principles of the law, and his grand presence will be sorely missed, an effective, aggressive civil rights leader – and a national voice for criminal justice reform,” Governor Andrew Cuomo said in a statement.

Thompson is well known for prosecuting former police officer Peter Liang, who was found guilty of manslaughter in February after shooting an unarmed black man.

In July 2014, his office publicly announced that they would stop prosecuting minor-leveled marijuana arrests, but also enforce amnesty programs for people with exceptional warrants.

Before serving as the D.A., Thompson owned a private law practice, where he represented Nafissaou Diallo, a Manhattan hotel housekeeper who accused French politician Dominique Strauss-Khan of sexual assault. The charges were later dropped by the Manhattan District attorney’s office.

The DA’s office confirmed that the Christian Culture Center will hold funeral service Friday and Saturday.
The wake will be held on Friday from 3 pm to 8 pm at the Cultural Center on Flatlands Avenue. Homegoing service will be at 10 am on Saturday.