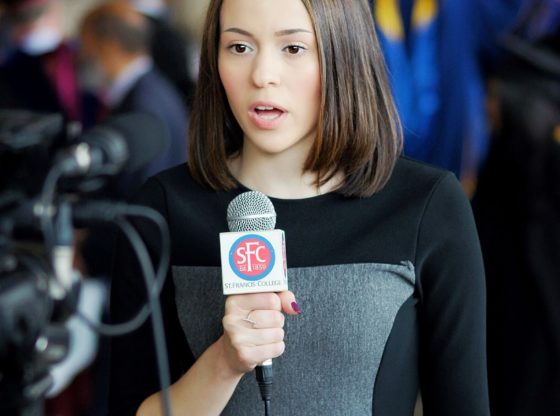 SFC communication arts senior Danielle Francavilla is set to graduate this May, but she leaves behind a legacy.

She was a founder of SFC Radio and is involved with SFC’s Women Leadership Network.

I asked Danielle why she chose St. Francis College, and she said: “When it became time to make my final decision I was tied between three schools — St. Francis being one of them. What appealed to me most was that SFC gave such generous scholarships, and I would be going entirely for free.

“The idea of not having any financial burdens in college or upon graduating like many do, was extremely exciting.

“Then I toured the college and as soon as I walked in the building I felt like I was in my old grade school, a small, tight-knit family. I knew I was going to attend, right in that moment.”

Once she was enrolled at SFC, Danielle started her freshman year as a psychology major.

“I thought that so many people helped me in my life that I wanted to do just that in return — give back by helping other people.

“So I did that, for a whole year. It was great, I loved it, and I still do love psychology, but it was safe. I knew I would get A’s in my classes, graduate, and become a psychologist of some sort.”

At the end of her freshman year Thomas Flood, VP of Advancement, asked her to do something that changed her life.

“Tom asked me to speak about my experience at the school’s premier fun raising event — The Charter Award Dinner, emceed by WNBC’s David Ushery. In front of nearly 500 people, I did it, and I had an immediate revelation.

“I loved it. I was nervous and uncomfortable but I loved it. And right there I knew I had to do this for the rest of my life.”

Before her sophomore year began, Danielle had changed all of her classes and declared herself a communication arts major.

“This meant changing everything I knew, it was extremely scary, but something felt so right about it. I wasn’t just taking the safe route anymore.

“I didn’t know it then, but Tom saw something in me that I didn’t see it myself, and pushed me to do something, and for that I will forever be thankful.”

Danielle will be graduating in May with a communication arts major and a minor in criminal justice.

She said: “Today, I am a journalist with a local and investigative beat and my goal is be a local TV news journalist in New York, at WNBC one day. And if you know me, you know I’m actively working toward that.”

Danielle has interned at MLB Network doing Media Relations/PR, which she said was “so fun but not where my career lies.”

She also had internships in newsrooms at top news stations in NY — WNBC (NBC 4 NY) and WPIX (PIX 11 News).

In the upcoming spring semester, Danielle is proud to say that she is “interning with WNBC again on the news desk.”

Throughout her college career and during her internships, Danielle has accomplished many things.

To name a few, she has her own podcast for the SFC Radio, she’s on Terrier TV, and she has experience “producing segments … writing for the web and going out in the field as a journalist on behalf of the station on breaking news and events like the Tony Awards.”

Currently, Danielle is working on a project that she holds near and dear to her heart — “a short film celebrating SFC commemorating 50 years of women and coeducation in 2019.

“It will premiere of the women’s film festival in the spring of 2019. I’m really proud of this project.”

As for her life on campus, Danielle said “sometimes I feel like I practically live at St. Francis because I’m super involved but that’s okay.

“I also report on SFC’s events as a Multimedia Journalist for SFCTV. I am a student founder of and on the Student Advisory Panel for the Women’s Leadership Network, and I work closely with the Advancement team on development/fundraising events, as I strongly believe in the importance of philanthropy.

“It’s a lot and it’s challenging, but I love it. At a small school running multiple grassroots efforts is exhausting and very time consuming, but I know it’s so worth it.

“These are things I will leave at SFC as my legacy when I graduate in May. The opportunity to be able to do these things is incredible to me. And I don’t think they would be possible at just any college.”

Her advice for SFC students is to take risks and do what makes you uncomfortable, “don’t always play it safe … take on as much as you can in college … busy is not a bad thing.”