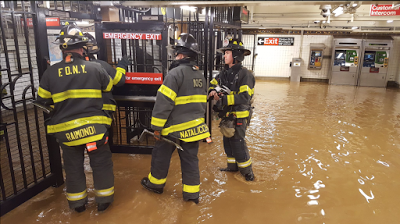 Picture yourself walking down the streets of Downtown Brooklyn. Its mid February so the air is crisp and sometimes the wind is rather powerful. You’re taking your time to reach your destination when you’re suddenly hit by something that made you wish you took a detour from your normal route. You were hit with a byproduct of strong wind and a wall of inexplicable odor that makes you want to burry your face in the collar of your jacket.

There’s nothing worse than walking into undesirable smells in the street, but it’s even more unsettling when you can’t tell what it is or where it’s coming from. This was the case for anyone with a sense of smell who strolled down Remsen and Montague Street in Brooklyn Heights starting around or near February 15th, 2017; undoubtedly with regret.

“I had no idea where it was coming from, all I know is it wasn’t something I wanted to come across at 7:30am walking into school” a student at St. Francis College said. This has to be one of the larger issues surrounding the mysterious lingering odor; it resides on a block that houses a college. Over time the smell was discovered to be coming through sewage grates in the street. Could that pose a health hazard to those frequenting the blocks ridded with this ungodly smell?

Well the answer is it absolutely can. According to Illinois Department of Public Health, being exposed to even low doses of hydrogen sulfide gas better know as sewer gas, can cause things like “eye irritation, a sore throat and cough, shortness of breath and fluid in the lungs.” Being exposed to gases over a long period of time like most experience on Remsen and Montague streets were can cause issues such as “fatigue, loss of appetite, headaches, irritability and poor memory.” All things that the college students near by experience enough of without hydrogen gas exposure.

Be that as it may, you would need to inhale large amounts of this gas over an extended period of time for long term damage to occur. I still would not recommend getting close to the area effected by the gas because it still poses multiple health risks. Plus, who wants to breath in questionable odors anyway?

Not only is this an issue for students and those in close proximity to the smell, it effected commuters greatly when on March 2nd, 2017 the sewer that caused the smell that shall not be named finally burst. The sewer broke in the most inconvenient of places, closest to the R train; not that there’s a good place for a sewer line to break. This took out the R train at both Court Street and Jay Street train stations for the better part of the whole day.

“I felt it was really annoying that I had to get off at Dekalb instead of my usual stop because I don’t know the area around it that well and it took some time to navigate.” stated Michael Votto, a frequent Downtown Brooklyn commuter. The R train has been notorious for delays and rerouting due to rail repairs since October of 2012 when Hurricane Sandy hit. Now that the repairs are coming to a close and commuters (myself included) are getting used to a more reliable R train experience, closing two stations out of the blue could cause commuters to lose what little trust they had left in the R train.

The Department of Environment responded to the break around 3:30pm on March 2nd but no train service at those two stations were restored till 9pm. The Q train was also a victim of the main break.

The smell that shook Down Town Brooklyn also wreaked havoc on business that spanned the blocks effected by the flooding. Some of these establishments include clothing stores as well as restaurants, some of which had basements under inches of sewer water. This caused half of the restaurants on the block of Montague Street to shut down for the entire day. As most business would agree, time is money, so time closed means money lost.

“I lost an entire days pay because the restaurant had to close and our basement had 5 ivnches of water, so there was no way we could’ve stayed open. It wouldn’t have been safe.” said Theresa Arnold, a waitress at Monty Q’s pizza parlor, appropriately placed on Montague Street. To have water pumped from a basement on average could cost over $1000, and to have a sump pump which aids in avoiding basement flooding could cost anywhere from $900 to $1500 depending on the size of the basement according to Roto Rooter.

Other establishments such as Nanatori and Lichee Nut said business took a few days to return to normal, post main break. I myself avoided the block in which these two establishments reside because of the smell before the sewer overflow. I couldn’t bring myself to eat anywhere near an odor so deterring and I couldn’t have been the only one with this frame of mind. With an idea like this business, especially restaurants, will be considerably effected.

Businesses are encouraged to invest in Business Interruptions Insurance which “provides funds to make up the difference between your business’ normal income and its income during and immediately after a forced shutdown.” in instances such as this.

Overall we can see what damage can be caused by a smell that warned us in the weeks prior to the main break. It had major potential to cause health concerns, train interruptions, as well as business closings; all of which it did. If a smell as ghastly as the one present in Downtown Brooklyn sounds anything like what may be happening in your area, be sure to address it before what happened here, happens elsewhere. If you smell something, say something.