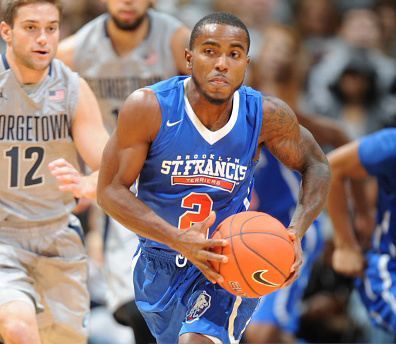 After making it to the NEC Quarterfinals last season and finishing (15-17, 11-7 NEC), the St. Francis Brooklyn Terriers men’s basketball team will return to the court Sunday for their first game of the 2016-2017 season.

The men had a season of ups and downs during their 2015-2016 campaign, defeating teams such as the Saint Francis University Red Flash, Sacred Heart University Pioneers and the LIU Brooklyn Blackbirds by a large scoring gap, while also taking hard hits against teams like the Boston College Eagles, Louisville Cardinals and Wagner Seahawks.

The men defeated the Mount St. Mary’s Maryland Mountaineers 55-49 in their last regular season game, before advancing to play them in the NEC Quarterfinals and losing by nine points.

The Terriers lost four talented seniors at the end of last year – Tyreek Jewell, Chris Hooper, Antonio Jenifer and Amdy Fall — who put big points on the board and led the team to the Quarterfinals.

”We’re going to try to do as well or better, but it’s definitely a challenge,” Head Coach Glenn Braica told SFC Today.

“More than half the team is new, so they’re learning from scratch and that’s very hard,” Braica said.

Another returnee who shows great potential is Redshirt sophomore Glenn Sanabria, who is returning to the team after suffering an injury during the 2015-2016 season. The 5’11 guard was ranked second in the NEC for three-point field goal shooting (45%) during his freshman year and scored a career-high 15 points in the December 13, 2014 game against Mount St. Vincent. He averaged 8.5 points during his regular sophomore season before suffering the injury.

“He had a great freshman year,” Braica said. “We have a lot of confidence in hm. He’s going to have to be a big part of it.”

Braica added that sophomore forward Joshua Nurse – who recorded five points and 13 rebounds in 13 games – has been showing significant improvement in preseason practices.

GlennSanabriaStFrancisNewYorkvLouisvilleeSukOBpcZkvlThe Terriers will travel to Raleigh, North Carolina Sunday to face the North Carolina State Wolfpack, a team that dropped their second game of the ACC Tournament to Duke by three points and finished (16-17, 5-13 ACC) last season.

Braica does not think his team is prepared enough for the season opener. He said they could use another three weeks of practice before taking on the Wolfpack, but will do the best with what they have.

“We’ll probably be short on a couple of things, we’ll do the best we can, and we’ll try to progress in the next couple of weeks so that hopefully when we get into the league, we’re really ready to go,” the coach told SFC Today.

Braica thinks his team needs to work on improving both defense and offense, but knows that defense will be even more difficult.

Braica said his team has a lot to work on, but is confident that they’ll be fine as soon as they get in the swing of things.

The Terriers and Wolfpack will tip off Sunday at 2 pm.

WOMEN’S BASKETBALL: TERRIERS TO IDENTIFY TEAM LEADER IN 2016-2017 SEASON
TERRIERS TO HOST NEC TOURNAMENT FOR THE FIRST TIME IN 18 YEARS