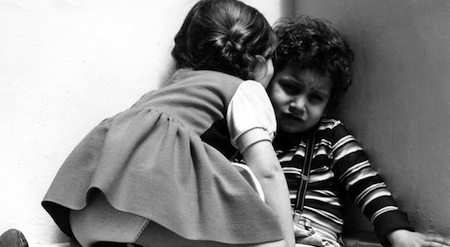 Valentine’s Day: may be the day many people celebrate the ones they love; or a holiday for singles to indulge in horror movies with a side of ice cream.

Perhaps, as Mark McSherry said, it’s “a mysterious holiday for those who you fancy”; or maybe just a commercial holiday created by Hallmark to generate revenue?

Many people argue about the significance of Valentine’s Day. The meaning behind it is debatable from many angles. Alphonso (Valentine’s Day) said, “To some people, love doesn’t exist unless you acknowledge it in front of other people. Some girls think Valentine’s Day is the make it or break it point in a relationship.”

There is the well known assumption that most guys could care less about the holiday, most girlfriends tend to care so deeply for. See the thing is, girls may tell you that it’s no big deal, but guys, you have to be smarter than to actually believe that. By now you should have figured it out: girls tend to speak in code. Why don’t they just say what they mean, you ask? The truth is that they probably have, or at least have hinted at it, but some guys just don’t listen.

For the most part you can’t go wrong with some chocolates, flowers, and some type of jewelry. Don’t make the mistake in thinking that your girlfriend hasn’t been over- analyzing everything you’ve done in your relationship so far, because chances are if you bomb on Valentine’s Day, well then it may be safe to assume that it’s the dog house for you my friend.

That’s the real issue here isn’t it? The difference between how men see the world of relationships vs. how women see it. It’s no secret that women tend to be more sensitive, while guys take the more relaxed approach. As Kayla Reece said, “Girls over analyze everything, boys over analyze zip.”

The funny thing about Valentine’s Day is that you can mock it all you want but couples all over the world give into it. Guys, like it or not, most of you buy roses or a card for your girl, and girls whether you blatantly tell him what you want or hint at it, or just expect him to magically know, deep down you still hope your guy will do at least a little something for you. Most girls don’t mind voicing their opinions about love on Valentine’s Day or on any other day for that matter, while men, more likely than not, need a little push.

Statistics show, that 85% of all Valentine’s cards are bought by women. 73% of flowers are bought by men, and only 27% by women. And Chocolate and candy sales reach profits of $1,011 billion during Valentine’s. According to the National Retail Federation, the average person spends about $103 on Valentine’s Day. 61.8 % of consumers plan on celebrating the holiday, which is up from 59.8 % one year ago. It seems like the girls get off easy buying a card, while the guys have to spring for the roses, chocolate and most likely plan a date of some sort.

Now let’s not forget about those who hate this holiday. Although popular response to that may be, “the only people who hate Valentine’s Day are the ones who don’t have anyone; this may be true, but it can also be something more personal. For instance, Valentine’s Day can also be known as a time for break ups. Although it’s difficult to pinpoint exactly how many relationships go belly up on Valentine’s Day it isn’t hard to understand why. More couples breakup between December holidays and Valentine’s Day than any other time of the year. The main reason: pressure. Pressure for the guys to create a magical day for their girlfriends.

Ladies, men are not mind readers, they are more relaxed creatures, they tend to not be the planning type; they go with the flow. And most aren’t into the whole ‘romantic thing’, don’t expect things, because chances are if you don’t let him know what you’re looking for, you will be disappointed. So make Valentine’s Day a group effort, plan it together, that way it takes a little of the pressure off of him, and you get to do that something special you wanted. Just as Hallmark’s latest slogan said, “Valentines Day is not for saying I love you, it’s for saying I love us.”

Statistics show that one in four Americans do not celebrate the holiday at all. In addition, 15% of American women (and even men) send flowers to themselves on Valentine’s Day. While, physicians of the 1800’s commonly advised their patients to eat chocolate to calm their pining for lost love, resulting in the ‘oh-so-common’ modern practice of singles diving into those chocolates.

But why does Valentine’s Day have to be about one kind of relationship between two lovebirds? It’s a day to celebrate love, so shouldn’t that apply to all those you love? The question is, what is love?

Love is unconditional care, sharing, joy, mutual respect, peace, family, friends, a feeling, a smile, a hug; love is all about others, and is not selfish. Love is not one kind of thing, or included in one kind of relationship, it comes in many forms and colors; the best example of love is your family and friends. Whatever way you celebrate Valentine’s Day, let it be from your heart, it may be extravagant for some like getting a marriage proposal, or it may be as simple as a child giving their mom a Valentine’s Day card, either way it’s all about LOVE. As Dodi Kenan said , “Valentine’s Day is about celebrating all those you love.”

And if you don’t have a valentine, hey, just think of all the money you’ll be saving. Happy Valentine’s Day!