BOXING: COTTO VS. CANELO, WHAT’S NEXT FOR GOLOVKIN, CATCHWEIGHTS, AND THE SECOND MOST HATED BOXER IN THE WORLD

Home /Opinion/BOXING: COTTO VS. CANELO, WHAT’S NEXT FOR GOLOVKIN, CATCHWEIGHTS, AND THE SECOND MOST HATED BOXER IN THE WORLD 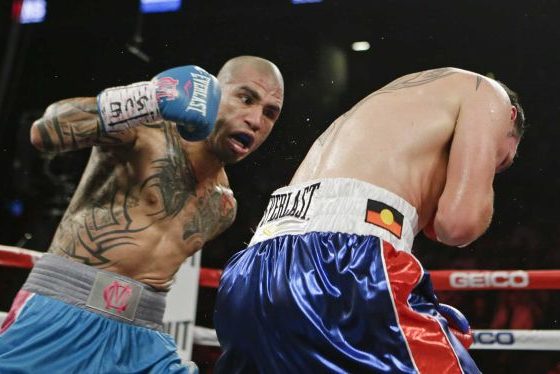 On the eve of June 6 we witnessed the return of Puerto Rican boxing star and current WBC World middleweight champion Miguel Cotto take center-stage for the first time in Brooklyn’s Barclays Center.

As HBO broadcaster Max Kellerman alluded to during last night’s main event coverage, Cotto vs. Canelo on paper is a fight that is almost guaranteed not to disappoint.

Now that both fighters did what they were supposed to do (Alvarez disposed of James Kirkland in only three rounds back on May 9), we can finally get this Cotto and Canelo showdown.

For well over one year I’ve been saying that this is the biggest fight to be made in boxing aside from Floyd Mayweather and Manny Pacquiao finally doing battle.

Now that Mayweather and Pacquiao had their fight, it’s only right that Cotto and Canelo have theirs, resuming the legendary Puerto Rico vs. Mexico boxing rivalry.

Now in regards to last night, there seems to be plenty of unfavorable reactions to the events which had taken place for a multitude of reasons.

Yes I know Cotto defended his middleweight championship with a 157 pound catchweight instead of the 160 pound middleweight limit.

I also understand and am aware of the fact that Cotto weighed in at 153.6 pounds for this fight, which would actually have him as a super welterweight being that the weight limit there is 154 pounds.

I also noted Cotto’s admission stating that he is not even a true middleweight, which begs many people asking at least a variation of ‘why are you holding the title hostage then?’

Simply put, people have goals, especially athletes, things in which they’ve set out to accomplish whether it is for money, legacy, satisfaction of their own ego, or parts of all three.

Cotto had a goal in mind; to become the first ever Puerto Rican boxer ever to capture world championship titles in four different weight classes. In doing so he would also become one of the handful of fighters ever to accomplish this four division milestone.

Throughout the rich history of Puerto Rican boxing, Cotto is and was the first to accomplish this from the same island that produced the likes of all-time greats such as Wilfredo Gomez, Carlos Ortiz, Wilfred Benitez, and Felix Trinidad.

Cotto moved up in weight simply to make history.

He’s not a true middleweight by design which leads to his last couple of fights being fought at a catchweight.

Naturally he still seems to be a super welterweight, however he did dethrone previous middleweight king Sergio Martinez in a ten round thumping last year, and then went to dismantling a rehydrated 182 pound Geale last night.

So let me guess, he’s a coward who’s destroying the middleweight division because he hasn’t yet fought undefeated knockout artist and WBA Super World middleweight champion Gennady Golovkin yet right?

Meanwhile Golovkin, who walks around at and normally rehydrates to 170+ pounds, has been accused by Andre Ward, former unified super middleweight champion (168 pound limit), of ducking Ward.

Ward has said it in the past to EsNews word for word.

“My thing is this, you look at like, Golovkin, you look at (Julio Cesar) Chavez (Jr.), those guys are ducking me right now,” Ward told EsNews last July.

Now here’s what Golovkin told EsNews just six days later in regards to Ward’s comments, and whether or not Golovkin is ducking him.

“No Andre Ward is too much for me, not today,” Golovkin said, and then he proceeded to shake his head before awkwardly looking around waiting for another question.

As WBC interm champion, Golovkin is Cotto’s mandatory challenger at the moment for Cotto’s WBC crown, however since talks with Canelo have been going on for a while now, it’s only right that Cotto and Canelo finally square off with the winner taking on Golovkin.

Golovkin is unquestionably next in line for whoever wins as Cotto acknowledged after defeating Geale last night, unless of course Golovkin suffers his first defeat between now and then.

And let’s be honest, Cotto and Canelo is the bigger fight in terms of, oh I don’t know, how about everything!?

It’s funny because if you gather the pulse of boxing fans all over social media, where almost everything generally gets around nowadays, you would be led to believe that Cotto is the second most hated boxer on the planet after Mayweather.

This is something that I still don’t understand.

Cotto is being the business man and is controlling his career now more than ever, hence the recent move to Roc Nation in an effort to get himself on the right track.

Because of this he’s viewed as a diva by some boxing fans and a lot of those same boxing fans support Mayweather and or Pacquiao who also control negotiations for their fights.

Cotto is taking shots for his catchweight fights, and some say that he’s making a mockery of the middleweight division.

Meanwhile everyone’s favorite boxer, the aforementioned Pacquiao, was nicknamed the catchweight king not too long ago.

Hell I don’t give a damn about the catchweight situation.

Not even the fact that Pacquiao actually requested one at 145 pounds to defeat Cotto back in 2009 for Cotto’s 147 pound limit WBO World welterweight title.

Or the time where Pacquiao defeated Antonio Margarito at a 150 pound catchweight for the 154 pound WBC World super welterweight title in 2010.

Or the time that Pacman defeated Marquez in 2011 in a 144 pound catchweight bout and retained the previously mentioned WBO World welterweight title.

I mean really I don’t care, but you can’t have it both ways.

We’ll celebrate Pacquiao for his big victories at the catchweight, but we’ll have our little die-hard boxing fan temper tantrums because Cotto has had a couple?

Please, if Cotto is mocking the middleweight division, then Pacquiao has mocked multiple divisions throughout his great career.

These sanctioned catchweights are over 100 years old and happen all the time, get over it.

Ward has one coming up in a couple of weeks at 172 pounds, are we going to boycott that?

Bringing this full circle in regards to what’s next for Cotto, it sounds as if the showdown with Canelo is imminent, and will take place in the fall unless something inexplicable happens.

Then again this is boxing so don’t be too sure.

In any event, Golovkin, who was at the Cotto/Geale massacre last night, is seemingly left without a dance partner.

Being that you can argue (and many have) that Golovkin has yet to face a quality opponent; I’ll suggest the undefeated former WBO World middleweight champion Peter Quillin.

Quillin and Golovkin have called each other out in the past, and a fight this fall between arguably the two best true middleweights in the world would make a lot of sense.

Quillin had trouble making the 160 pound limit in his most recent outing by weighing in at 161.4 pounds on his first attempt, and then 160.6 two hours later.

With that being said I’m sure that Quillin and Golovkin could agree to a…dare I say…catchweight, unless Quillin could make the weight this time around.

In regards to Cotto and Canelo, I would give the slight edge to Cotto. Under world class trainer Freddie Roach Cotto has demonstrated a new found aggression, with improved defense, and terrific head movement that sets up for effective counter punches.

This was executed in each of his previous fights.

Canelo is one of the best boxers in the world whose only loss came at the hands of the legendary Mayweather by majority decision in September 2013.

Cotto is an all-around better boxer than Canelo, and while Canelo can match Cotto’s punching power, his defense is not as sharp as Cotto’s, and I think Cotto will be victorious in this potentially epic clash.