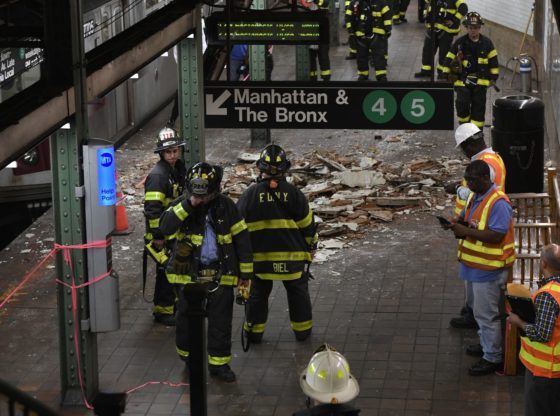 According to the FDNY, there were no casualties and only one minor injury when a man was hit in the shoulder.

The incident occurred on the Manhattan-bound side of the Borough Hall station around 3:30 p.m., forcing 4 and 5 trains to skip the stop on their way to Manhattan, according to the M.T.A during the PM rush.

“This is a very old station,” Byford said, “but we will get to the bottom of what happened.”

As of now, it is unknown when northbound 4 and 5 trains will resume picking up passengers on the platform again.

In the meantime, transit workers are clearing away the debris.

Engineers are also looking at the sidewalk above the station because there is a gap between the surface and framework of the station.

“We’ve had that checked out as a precaution, I’m not taking any chances,” Byford said.