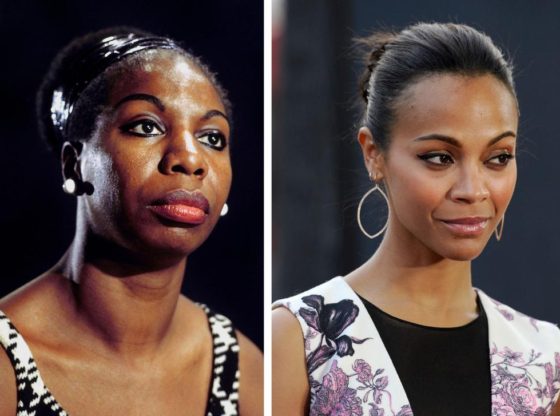 Actress Zoe Saldana’s portrayal of Nina Simone in the biopic Nina has stoked controversy after the official trailer was released last week.

Simone, a prominent blues singer and Civil Rights activist, died in 2003 after a battle with breast cancer. She was 70 at the time.

The trailer shows Saldana, as Simone, with her appearance altered by a prosthetic nose, and makeup to darken her skin.

Sam Waymon, brother of Nina Simone, also criticized the film, complaining the director did not properly consult with the family about the production.

“What we consider blackface to match the Civil Rights-era soul singer in the film Nina is an outrage. It’s an insult, to our people and their struggle,” he explained to the NY Daily News.

Lisa Simone Kelly, daughter of Nina Simone, spoke out about the controversy, defending the Hispanic actress.

“It’s unfortunate that Zoe Saldana is being attacked so viciously when she is someone who is part of a larger picture. It’s clear she brought her best to the project but unfortunately she’s being attacked when she’s not responsible for any of the writing or the lies,” she said in an interview with to TIME.

However, Kelly expressed opposition to the production during earlier stages of filming. In addition to casting concerns, Kelly had worries about the truthfulness of the film’s script. The movie focuses on fictionalized a romantic relationship between the late singer and her manger Clifton Henderson played by David Oyelowo.

“There are many superb actresses of color who could more adequately represent my mother and could bring her to the screen with the proper script, the proper team and a sense of wanting to bring the truth of my mother’s journey to the masses,” she said according to Rolling Stone magazine.

Kelly also noted that she would have favored Viola Davis or Whoopi Goldberg as choices for the lead role.

“Zoe Saldana delivers an exceptional and mesmerizing tribute to Nina Simone. The most important thing is that creativity or quality of performance should never be judged based on the color, ethnicity, or physical likeness,” he stated, according to TIME.

Other films have recently been criticized for choosing to portray minority characters using actors of a different race. Last year critics expressed outrage over Emma Stone’s portrayal of an American Asian woman in the film Aloha. Recently others voiced resentment over the announcement of British actor Joseph Fiennes as Michael Jackson in an upcoming comedy.

Nina will be released in theaters on April 22.