BLACKBIRDS OUTLAST TERRIERS IN OT OF ’16 BATTLE OF BROOKLYN 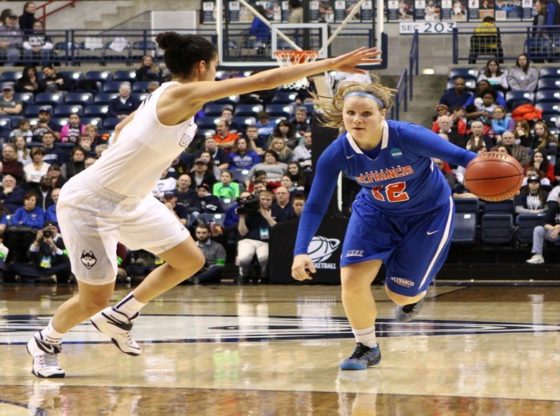 It took overtime to decide the 2016 Battle of Brooklyn between the LIU Blackbirds and St. Francis Terriers women’s basketball teams. In the end, it was the Blackbirds (8-16, 6-7 NEC) who outlasted the Terriers (5-19, 2-11 NEC), 65-62; strengthen by a combined 46 points from guards Shanovia Dove and Battle of Brooklyn MVP Shanice Vaughan.

Vaughan capped-off her big afternoon with 22 points, seven rebounds, and six assists. Dove finished with team-high’s in points and rebounds with 24 and eight respectively.

“Every game you play, it adds to your library of experience. Late-game situations are very difficult to duplicate in practice,” Terriers head coach John Thurston said. “At the end of the day, you’ve got to make some tough shots. What you always want is to have a chance to win the game. When Dove is playing for them, they’re very good, they put a 20-point scorer out there.”

Forward Cassidy Derda, who had career-highs across the board with 16 points on (7-of-7 shooting) and seven rebounds, led the Terriers in the inner-borough clash.

“I thought Cassidy had the best game she’s ever played for us,” Thurston said of Derda’s career-best showing. “She kept us in the game in the first half.”

In the game’s first quarter, the Blackbirds got off to a strong offensive start, posting 18 first quarter points. They were able to penetrate the Terriers defense and create some open looks near the rim to create their six-point lead to end the first.

The Terriers did lead 12-11 at one-point in the first, but the Blackbirds responded by putting together a 14-1 run which overlapped into the second quarter. After trailing 25-12 in the second, the Terriers then cut into the lead, outscoring LIU 13-7 heading into halftime, trailing 32-25.

The Blackbirds maintained their lead for the entire third quarter, ending the fourth quarter with a 45-39 lead.

After trailing for a majority of the game, the Terriers managed to get back on top within the first two minutes of the fourth quarter, 46-45 as a result of a 7-0 run. The Blackbirds didn’t get on the board in the first five minutes of the quarter, but regained the lead, 47-46 with 4:40 to go.

With a tied game at 49 with a minute to go, the game was hanging in the balance. Terriers’ guard Leah Fechko stepped-up to hit a clutch lefty lay-up set up by a right to left crossover with 13 seconds to go, putting SFC ahead 51-49.

Blackbird guard Vaughan responded with a lay-up of her own to tie the contest at 53 with six seconds to go, and this ultimately forced the game into overtime.

In the overtime period, the Blackbirds started out strong, accumulating a 58-53 lead with 3:06 left. As a result of a 7-2 run, the Terriers later tied the game at 60 with 43 seconds remaining.

Vaughan again came away with another late lay-up to put LIU-Brooklyn ahead 62-60 with 30 seconds left to play. Two free throws from Maria Palarino and three more from Dove made it a 65-62 Blackbird lead with less than two seconds of play remaining.

Coming out of a timeout, the Terriers drew up a play to create an open-three opportunity, but could not get the shot-off in time, and the blackbirds picked up their first victory against the Terriers since February of 2012.

“We had the open look at the end of regulation, two people who were open,” Thurston said of the game’s closing moments. “We had Kat (Phipps) who was open and Alex (Delaney). If it goes in, we’re jumping up and down. If it doesn’t you go to overtime.”

Along with Derda, the Terriers benefitted from standout performances from Fechko, Palarino, and Olivia Levey.

In closing, coach Thurston added his desire to see his team earn more chances at the foul-line, seeing as how the Terriers are one of the best free throw shooting teams in he conference, and today they went 9-of-12 (75.0%).

“You have to play the game aggressive offensively, the goal always has to be to get in the double-bonus,” he said. “That’s how they scored (LIU-Brooklyn), because they got the double-bonus in the fourth quarter. In a game like that, I think you’ve got to shoot more than 12 free throws. We’re a really good free throw shooting team and we only took 12 free throws.”

The Terriers next game will take place at Bryant University on Monday at 1 p.m.