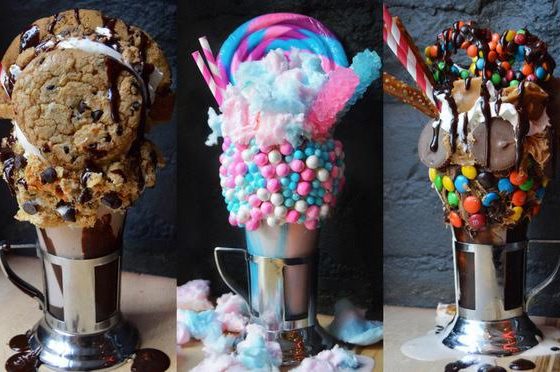 Dozens have been wiaing on line at Black Top Craft Burgers & Beer in SoHo to buy the restaurant’s signature milkshakes.

The 1,600 calorie shakes — priced at $15 — generated buzz on social media after restaurant owner and executive chef Joe Isidori added them to the menu in November and credited his wife for the idea.

“One day my wife wanted me to make her a cotton candy milkshake, so I whipped something up, put it on Instagram and the rest is history,” Isidori said according to ABC News.

“We launched these bad boys in late November or so and since the first week of December we have had basically a one- to two-hour wait at the door at all times,” Isidori said according to the Huffington Post.

“I can’t wait to go there. I heard the shakes are amazing,” senior Victoria Paredes said.

The restaurant also offers seasonal and customized shakes such as the Birthday Cake, Caramel Apple and S’mores. The restaurant will also have a limited shake for Super Bowl 50 and the Red Velvet milkshake for Valentine’s Day.

“I’ve seen the pictures online. I think they are a bit overrated though,” senior Lauren Miller said.

Food enthusiasts who are intimidated by the shakes can go for Black Tap’s regular nine milkshakes for $7. Milkshakes include Oreo cookies & crème, vanilla, coffee, Nutella and strawberry.