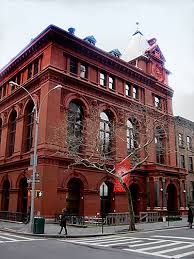 The event was held in concert with the Brooklyn Heights Association, the Landmark Preservation Commission, and the National Park Service, which unveiled a plaque at the BHS that is an identical replacement of the original plaque, which allegedly disappeared several years ago.

Prior to the unveiling of the plaque, there was a ceremony in which a number of speakers were introduced. Among them was Brooklyn Historical Society President Deborah Schwartz, New York Congresswoman Nydia Velazquez, and Brooklyn Heights preservationist Otis Pearsall.

Schwartz welcomed the audience and introduced Representative Velazquez, who applauded the preservation of Brooklyn Heights. “You have done an amazing [job] not only in preserving [the architecture], [but also] making sure that […] it’s about the people,” she said.

Congresswoman Velazquez then shared that to her, the most important aspect of preserving designations is that generations can continue to learn the history of an area—particularly the school children. She emphasized that the people matter just as much as the location, and praised Brooklyn for its demographics. “What makes Brooklyn so great? The diversity,” she said.

Next Schwartz introduced Otis Pearsall. “Brooklyn would not be [what it is] without Otis Pearsall,” Schwartz said of the renowned Brooklyn Heights-based preservationist. Pearsall is often referred to as the “living legend of landmarking,” Schwartz continued.

After Pearsall gave a brief history of the importance of Brooklyn Heights, the plaque was unveiled.