BIG WINS FOR SFC MEN & WOMEN ON THE ROAD

Home /Sports/BIG WINS FOR SFC MEN & WOMEN ON THE ROAD 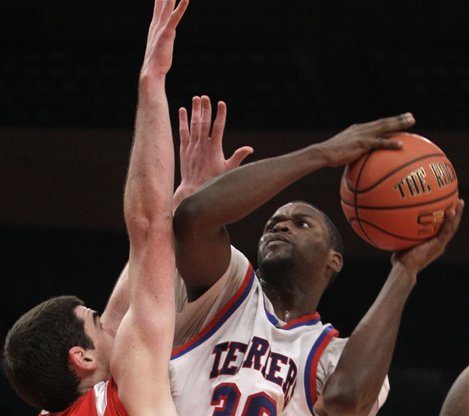 The Terrier Men traveled to Loretto, Pennsylvania on Thursday, Jan. 26, to face-off against namesake St. Francis (PA) and won 75-65. In the game, junior forward Akeem Johnson led St. Francis in scoring, matching his career-high with 22 points while grabbing a team-high nine rebounds in the contest. Senior swingman Stefan Perunicic chipped in with 13 points while teammates Ben Mockford and Travis Nichols assisted with 11 points apiece.

Following Thursday’s victory, both the Men and Women traveled to Moon Township, Pennslyvania for their games on Saturday, Jan. 28, against the Colonials of Robert Morris University.

The Lady Terriers started the double-header at 4:00pm against their Northeast Conference rival and won 70-62 as star shooting guard Sarah Benedetti scored a career-high 26 points in the contest while draining 50 percent (7-of14) of her shots from long-distance. The freshman sharpshooter was a rebound shy of recording her first double-double as she pulled down a team-high nine rebounds in the game. Classmate Eilidh Simpson posted a career-high in scoring with ten points on 3-of-4 shooting from the field.

“We are very excited about tonight’s victory,” commented head coach Brenda Milano. “The last four games the girls have been extremely competitive. They responded to every adjustment, both on offense and on defense. For the first time in a while, we maintained a lead down the stretch and handled our composure in doing so. When Robert Morris made a run, we adjusted and responded. They are a good team and to beat them on the road was a huge victory for us.”

In the double-header finale the Men took notes from the Women’s game and cruised to a 81-68 victory over Robert Morris and improved to their best start in league play since the 2000-2001 season. Sophomore point guard Brent Jones scored 16 of his career-high 19 points in the second-half while junior forward Travis Nichols chipped in with 16 points off the bench.

Jones converted 6-of-11 field goal attempts including draining all three shots from behind the arc and knocking down all four of his free-throw attempts. Nichols went 5-for-7 from the field and hit 3-of-5 from long-distance. Freshman forward Jalen Cannon produced his fifth double-double of the season with 13 points and 11 rebounds. Cannon had 12 points and eight boards in the second-half.

With the victory, the Terriers are now tied with Wagner for second-place in the conference with an 8-2 mark and have improved to 11-10 overall. The Colonials dropped to 16-7 (7-3 in NEC play) in the loss.

Thursday’s and Saturday’s victory gave the Terrier Men their first road sweep of St. Francis (PA) and Robert Morris since 1998.

St. Francis, winners of eight of their last 10 games, will host Central Connecticut State on Thursday, Feb. 2nd at 7:00pm.

The Women will conclude their Western Pennsylvania raodtrip against Saint Francis University (PA) on Monday, January 30th at 7:00 pm from DeGol Arena.