BIG DISAPPOINTMENT IN THE BIG APPLE 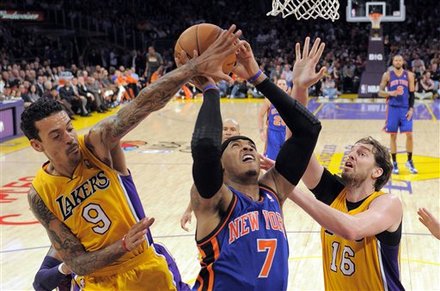 Another NBA season underway, another abysmal year for the New York Knicks. The Knicks broke a three-game skid on Tuesday night when they upended the lowly Detroit Pistons 113-86, but before that they lost nine of their previous 10 games.

With one of the most anticipated free agent classes ending in a success where the Knicks courted Amar’e Stoudemire and then paired him with Carmelo Anthony in a midseason trade that altered the Knicks roster drastically, expectations shot through the roof.

“The Knicks are back” proclaimed Stoudemire after signing with the Knicks in 2010 to the New York media. New York fans finally had something to cheer about. As they once were the toast of the town, they have now become the city’s rotten apple.

With one-third of the lockout-shortened season over, the Knicks record stands at 8-13. Despite the team’s slow start, the Knicks have time to turn their season around and become the contenders that everyone has envisioned with two superstars.

“My gosh. I would have never thought that we couldn’t do that. It’s really perplexing. And when I talk about the crisis, that’s the crisis. I can’t believe we’re not doing it.” said head coach Mike D’Antoni describing the inept play on the offensive end the Knicks have displayed over the past few games reported by Mich Lawrence of the New York Daily News.

New York is also scoring less this season under D’Antoni’s offense this season. Last year, the Knicks averaged 106.5 points per game, the second-highest in the league. This season, however, New York is only scoring 93.7 points per contest.

“If we’ve got Carmelo and Amar’e on the same team and we can’t get over 85 points, we don’t deserve to win. Pretty soon we’ll be saying, ‘If we can hold them in the 60s we can win.’ But we’ll come out of this funk and we’ll play well.” says Mike D’antoni to the Daily News.

Anthony, who is responsible for 23.6 points per game, sat out two games with a wrist and ankle injury before suiting up against Detroit. The four-time All-Star is currently listed as day-to-day.

Knicks fans remember the encouraging offseason that former general manager Donnie Walsh pulled off when he signed Stoudemire and point guard Raymond Felton. Although they began the year 3-8 after 11 games, chemistry did set in and the Knicks went on a remarkable run winning 13 of 14 games improving their record to 16-9.

Before Walsh pulled the trigger on the Anthony deal, the Knicks were struggling at 28-26. Since the Anthony trade the Knicks have gone 22-27 while the Denver Nuggets have thrived going 30-17. The Knicks traded Felton, who was having a career year averaging 18 points per game and 9 assists per game, developing forwards Danilo Gallinari and Wilson Chandler along with Timofey Mozgov. Denver received four starters while sending the Knicks just two, Anthony and Chauncey Billups. Not only has the Anthony trade dampened the Knicks depth but it has darkened what once was a prosperous future, a future that Walsh made a reality after rebuilding the Knicks.

The Knicks are battling the challenges of not having a training camp due to the lockout or an experienced point guard to run the show which Baron Davis is expected to do once he returns from his injury. Davis is a two-time All-Star who once led the Golden State Warriors to a first round upset series victory over the then top-seeded Dallas Mavericks. Davis averaged 25 points per game, 7 assists, 3 steals, and 5 rebounds during the 2007 playoffs. For his career, Davis is averaging 16 points per game and 7assists. When healthy, Davis is regarded as one of the top guards in the NBA.

Until he returns to the hardwood, Davis is looked upon as the Knicks messiah. If he is the Davis of Golden State, the Knicks should be able to flourish, which is what D’Antoni is hoping for as he is on the hot seat once again.

The Knicks recent struggles have entertained trade rumors involving Dwight Howard from the Orlando Magic in exchange for Stoudemire. Other teams have inquired about the Knicks All-Star forward including the Atlantic Division leading Philadelphia 76ers. When you’re losing, any news seems encouraging.