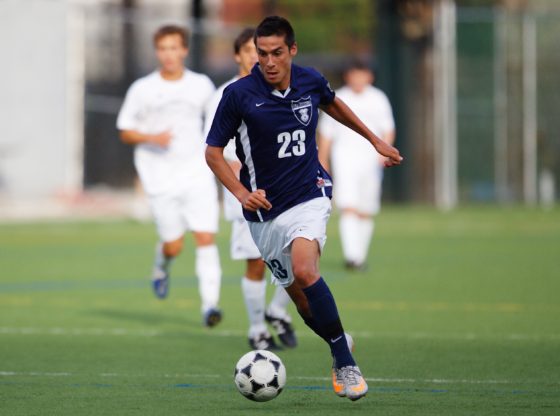 The St. Francis College Men’s Soccer team is heading into the 2012 season with a chip on their shoulders after missing the playoffs despite boasting a 10-5-3 record.

In 2011, two players from St. Francis College were placed on the NSCAA All-Region second-team by the National Soccer Coaches Association of America: junior Adam Maabdi and sophomore Gabriel Bagot.

No other pair of teammates in the conference combined for more points than Maabdi and Bagot 2011.

Compared to 2010, when Bagot scored four goals and one assist, he broke out in 2011, scoring eight goals and three assists, earning him 19 points on the year.

“He has strength, speed, and is incredibly skillful,” said head coach Tom Giovatto. “I expect him to improve from last season and to be a NEC Player of the Year candidate.”

Junior goalkeeper, Tyler Clarhaut was another pleasant surprise for the Terriers last season. Clarhaut finished the season with a 0.82 goals against average and six shutouts in his first season as a starter.

All three of aforementioned players will be returning for the 2012 season to give the Terriers that final push they need to make a run at the playoffs. They are, however, losing three seniors on the team, Aldo Toma, Jonas Pantelidis, and Robbie Weir. They will seek leadership considering Toma and Weir are team captains.

Coach Giovatto has high expectations for the upcoming season.

“I feel if we play to our potential we will compete for the NEC Championship,” said Giovatto.

St. Francis nearly clinched the playoffs for the second time in three years but fell just three points shy in 2011.

It has been rumored that St. Francis is currently trying to move the home field of the soccer team closer to the school in order to draw more crowds and get involved in the community. The current home field is the Floyd Bennett Field in the Aviator Sports Complex located in Southeast Brooklyn.

“Yes, I have heard the rumors, it is very exciting,” Giovatto said. “St. Francis College is partnering with the community and Brooklyn Bridge Park in effort to use Pier 5 for future practices and games.”

There may be a problem with the new project as well. It is unknown whether the new site for the field will meet the dimensions of the NCAA regulations for a soccer field.

As for when the project will be completed remains a mystery itself. Wherever the men’s soccer team does end up playing, they must be comfortable on their home field. In 2011, they were 5-1-2 in home games.