BEHIND EVERY GREAT MAN IS AN EVEN GREATER WOMAN

Home /Entertainment/BEHIND EVERY GREAT MAN IS AN EVEN GREATER WOMAN 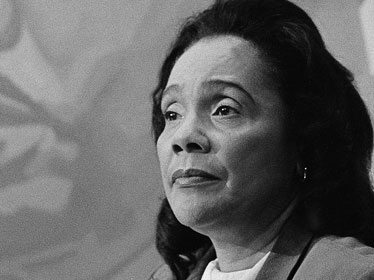 In honor of Black History Month, Lifetime will have multiple showings of the two-hour movie that showcases the loyalty and dedication of the wives of Dr. Martin Luther King Jr. and Malcolm X.

Blige stars as Betty Shabazz, the wife of Malcolm X and how she used her voice to educate the world about Malcolm X after his death in Harlem’s Audubon Ballroom.

Blige and Bassett recently sat with the cast of “The View” to discuss the importance of the movie.

“Betty really looked up to Coretta, she was her savior…Betty was strong and nurturing and determined not to see her family suffer,” said Blige.

Bassett added that Dr. King and Malcolm X had their ideological differences although they did have similar intent.

Nonetheless, their wives were close friends. They relied on each other during the deaths of their husbands.

Bassett, who portrays Coretta spoke about the importance of the wives.

“The wives were able to go beyond what their husbands accomplished…We still talk about them,” said Bassett.

“Sometimes, when women are married to powerful men, the women aren’t recognized, but Betty and Coretta were recognized,” said Blige.

Shabazz was a professor at Brooklyn’s Medgar Evers College. She taught health administration and became director of the school’s Department of Communications and Public Relations.

Corretta was an aspiring opera singer and cast her dreams to the wayside to support Dr. King’s efforts for equality.

The film projects that behind every great man is a greater woman.